In Hindu mythology, Shri Hanuman is regarded as the God of power, strength and knowledge. He is known as the ‘param bhakt’ of lord Rama and is the incarnation of Lord Shiva. He was born to Kesari and Anjani on the Chaitra Shukla Purnima (Chaitra Shukla Purnima is the Full Moon Day on the Hindu Calendar Month of Chaitra) that is why, he is known as ‘KESERI NANDAN’ and ‘ANJANEYA’. 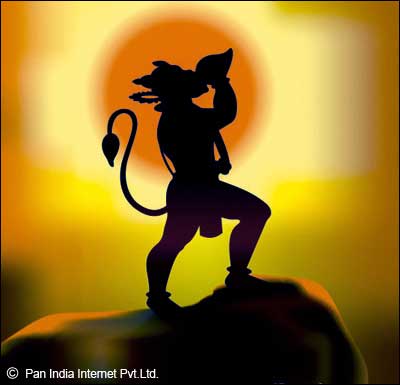 The philosophy of epic Ramayana is incomplete without the understanding of the unfathomable devotion of Lord Hanuman for Shri Rama. As Hindu Mythology says, he was the incarnation of Lord Shiva the God of Destruction, the third god of Hindu trinity (All this universe is in the glory of God, of Shiva, the God of Love. The heads and faces of men are His own and He is in the hearts of all (Yajur Veda). Lord Hanuman is regarded to be the son of Hindu deity ‘VAYU’ (the wind). He was taken by Vayu to Lord Sun to gain Vedic, shastra s and moral knowledge. He gained his whole knowledge from Lord Sun, as he was considered as omniscient on the planet earth.

As per the mythology, Hanuman ji is invincible and blessed to be immortal. The supremacy possessed by him is very beautifully described in Ramayana, during the Ramayana war of Lord Rama against the mighty Ravana. The Sundara Kanda, the fifth book in the Ramayana, focuses mainly on the adventures of Hanuman. He is also known as Mahaveer Hanuman which means almighty.