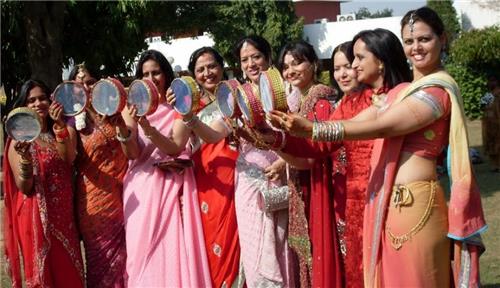 Karva Chauth Vrat is of significant importance in Punjab and its neighboring states. The Karva Chauth vrat is observed by married women. Newly married brides celebrate this fast with great rejoice in their first year of marriage. Nowadays unmarried girls also keep this fast to pray for a good husband.

The girl’s mother sends a Bayaa {similar to Baayna) to her daughters house. Bayaa contains sari, Sindoor, Bangles, Bindi, sweets and a token gift for the mother-in-law. The mother-in-law sends a Sargi to the daughter-in-law s house. A Sargi contains Sari, Sindoor, bangles, Bindi, Mehendi, red ribbon, coconut, a gift and Seviyan which is eaten on the morning of Karva Chauth.
Women observing the Chauth vrat wash their hair and apply Mehndi on this day.

On the day of Karva Chauth,women wake-up before sunrise at about 5 am, eat food from Sargi (sent by mother-in-law) and drink water. They dress up in their Fineries. The menu is as per preference of each house. One has to eat seviyan normally with milk as Shagun.

After the Puja, the women seek the blessings of their-mothers-in-law by touching their feet and offering almonds, saree and gift to them as a mark of respect. 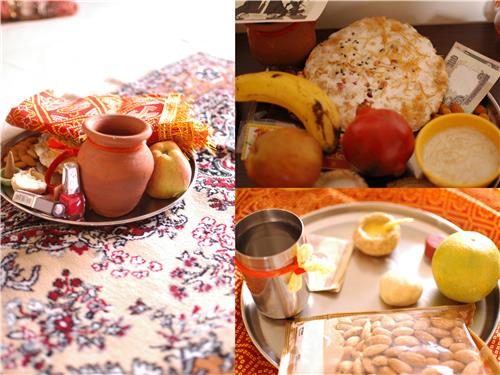 Breaking the Fast: After sunset, with the sighting of the moon, the women go up to the terrace with their Puja Thalis, light Deepak and through a sieve look at the moon while simultaneously offering Arag from the glass. They offer water and sweet Mathri 7 times to the moon after saying a short prayer for the husband.

This song is sung 5 times. A Parikrama of moon is done each time after offering Arag. For Parikrama, one turns a full circle standing at one place. The fast is broken by first taking a piece of the Mathri and a sip of water, which was offered to the moon.

After the Puja, one touches the feet of the husband and elders in the family. 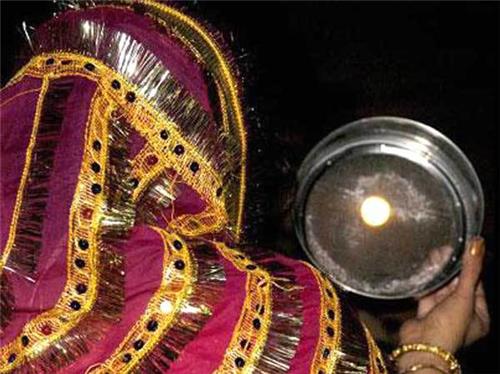 A long time ago, there lived a beautiful princess by the name of Veeravati. When she grew up, she was married to a king. On the occasion of the first Karva Chauth after her marriage, she went to her parents house to do the vrat.

After sunrise, she observed a strict fast. However, Veeravati was very delicate and could not stand the rigours of fasting. By evening, Veeravati felt very weak, and fainted. Veeravati had seven brothers who loved her dearly. They couldn’t stand the plight of their sister and decided to end her fast. They made a fire at the nearby hill and asked their sister to see the glow. They assured her that it was the moonlight and since the moon had risen, she could break her fast.

When the Veeravati reached the palace, she found the king lying unconscious with hundreds of needles inserted in his body. Each day she managed to remove one needle from the king’s body. Next year, on the day of Karva Chauth, only one needle remained embedded in the body of the unconscious king.

The queen Veeravati observed a strict fast that day and when she went to the market to buy the karva for the puja, her maid removed the remaining needle from the king’s body. The king regained consciousness, and mistook the maid for his queen. When the real queen Veeravati returned to the palace, she was made to serve as a maid.

However, Veeravati was true to her faith and religiously observed the Karva Chauth vrat. Once when the king was going to some other kingdom, he asked the real queen Veeravati (now turned maid) if she wanted anything. Veeravati asked for a pair of identical dolls. The king brought back the dolls for her.

The queen Veeravati always used to chant this song “Roli ki Goli ho gayi... Goli ki Roli ho gayi" (the queen has turned into a maid and the maid has turned into a queen). On being asked by the king as to why did she keep repeating that song, Veeravati narrated the entire story. The king repented and restored the queen Veeravati to her royal status. It was blessings of Goddess Parvati and the queen s devotion and Her faith that won back her husband’s affection.
Add comment
JComments