The Jain community celebrates the birth anniversary of the 24th and the last Tirthankara, Vardhman Mahavir, the founder of Jainism as Mahavir Jayanti every year.

The birth anniversary of the 24th and the last Tirthankara of the Jains, Vardhman Mahavir, the founder of Jainism, is celebrated by the Jain community in March.  Born a prince in 599 BC, Mahavir renounced worldly life at the age of 30 and undertook austere penance until he achieved realisation. 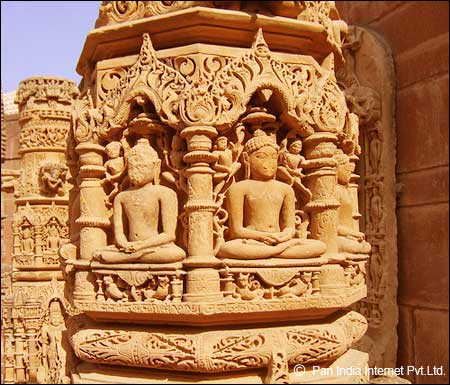 Mahavir, also known as Vardhamana, is the last one in the galaxy of Twenty-four Teerthankaras (Jain Prophets). Lord Mahavir has been acclaimed as one of the greatest prophets of peace and social reformation that Bharat has ever produced. He was born to a pious couple, Siddhartha (king of Kaundinyapura on the outskirts of Vaishali near Patna in Bihar). and Priyakarani or popularly Trishala Devi - who were deeply permeated with the philosophy of Jainism preached by Parswanatha, the 23rd Teerthankara.

Mahavir renounced worldly life at the age of 30 and undertook austere penance until he achieved realisation.  Even as a boy, Mahavira came to be associated with many episodes of absolute fearlessness which earned him the name `Mahavira . He grew up as a prince, excelling in physical prowess and intellectual acumen. He renounced the pleasures and luxuries of the place, as also the power and prestige of kingship and undertook a life of intense penance for more than twelve years. He calmly bore not only the rigors of nature but the torments from the ignorant and mischievous among his own countrymen also. He finally became self-illumined. But not content with his own personal salvation, he chose to become a great human redeemer.

Lord Mahavir spread the message of salvation to the world and had many followers. Mahavir preached non-violence, prohibited any kind of killing and taught his followers to seek salvation through penance and abstinence. They are also advised to donate money, clothes and grain to the poor. The Jains are divided into many sects of whom the main ones are Digambaras and Shvetambaras with the latter again divided into Deravasis and Sthanakvasis.


Mahavira initiated a simple five-fold path for the householders: Ahimsa (Non-injury - physical or mental - to others), Asteya (non-stealing), Brahmacharya (temperance in sexual pleasures) and Aparigraha (non-acquisition of property). Mahavira s injunctions for the monks and nuns were however very exacting. Abstinence from every kind of physical comfort and material possession and absolute dedication to the highest ethical and spiritual discipline were enforced. Even to this day, nearly 2600 years after the passing away of that great master, this pure and upright tradition of the monks has been maintained. Thousands of white clad Sanyasins and Sanyasinis and also nude monks move on foot from place to place throughout the length and breadth of the country, carrying Mahavira s gospel of peace, non-injury and brotherhood among people.

Mahavira left his mortal coils at the age of 71 on the Deepavali day. But the lamp of peace which he lit continues to glow through the myriad lights of the Festival of Lights.