As the name suggests, Bali Yatra means a journey to Bali. Bali Yatra is mainly celebrated in the state of Odisha (Orissa). It is held on the full moon day in the month of Kartik which is considered to be the most auspicious month out of the 12 months of calendar, that coincides with the months of October-November according to the Gregorian calendar. 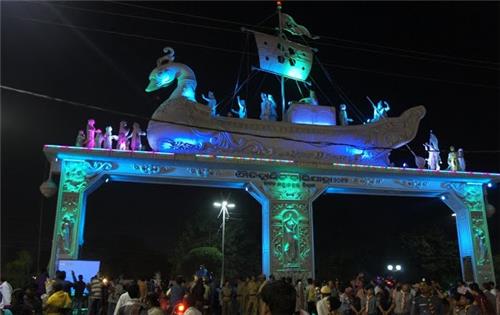 Traditionally Bali Yatra symbolizes the culmination of all religious festivals held in the month of Kartik. Images of Karthikeswar are worshiped and immersed in the waters of river Mahanadi, near the Shiva Temple, to mark the end of the month of Karthik The Fair is held on the banks of Mahanadi River in the fort area of Cuttack city.

As a ritual and a tribute to ancient sailors of the region people float artificial boats made of paper, cork, colored paper and banana tree barks in the river and water tanks. There is also a famous tradition of lighting small lamps in the hollow of the boat called Boita Bandana. Apart from the tradition it also gives an amazing spectacle to the visitors as the scene of numerous boats lit with lamps floating in the river.

According to the Legends, the day of Kartik Purnima was considered very auspicious by the traders (Sadhabas) of Odisha (Orissa) to venture on a journey to distant lands namely the islands of Bali, Java, Sumatra, Borneo and Ceylon (Sri Lanka).

The Festival of Bali Yatra has gained immense importance recently as tourists from far and wide gather here during the festival to witness the culture of Orissa. The government of Orissa organizes numerous tours and packages during the festival for tourists to have a complete look and feel of the state culture and richness. Orissa as a state is famous for its culture and vibrancy, which illuminates during this festival.
On the Festival of Bali Yatra, a grand fair is organized that displays a great variety of goods and accessories for buying and selling. Apart from the rituals and fair there are number of arrangements by the government like boating for the visitors which has slowly emerged as a great temptation.