Bhai Dooj has different regional names and in different region there are various distinct ways in which this beautiful festival is solemnized. But the features that are common in all rituals is the act of smearing a tilak of roli (vermilion), kesar (saffron) and rice on the brother s forehead by their sister as a mark of their love and protection.

The name Bhai Dooj is popular in UP and Bihar where this festival is of huge significance. In Uttar Pradesh, the story of Bhai Dooj is narrated after performing all the rituals. Bhai Dooj rituals include the sister applying a tilak of roli and rice on her brother s forehead and praying him with an aarti to shed off all the evil effects.
In Bihar and some eastern parts of Uttar Pradesh, this festival has a unique way of celebration. Here sisters imitate the central character of the story of Bhai Dooj, where a sister saves her brother’s life by cursing him until he gets married. This curse is seen as a mean to ward off all the dangers and evil effects of the spirits surrounding the brother. The sisters in these region start this day by cursing and abusing their brothers. After doing so, they prick their own tongues as punishment, with a thorny wild fruit and ask for their brothers forgiveness for the curses, and also for past mistakes. This state also includes a unique custom where the brothers eat grains of Bajri with water from their sisters’ hands.

West Bengal this festival is known as Bhai Phota and is celebrated on the first or the second day of Kali Puja festival. In the states of Bengal the sisters fasts religiously until she applies a phota or tilak with sandal wood paste on her brother s forehead. She offers him sweets and gifts and prays for his long and healthy life. 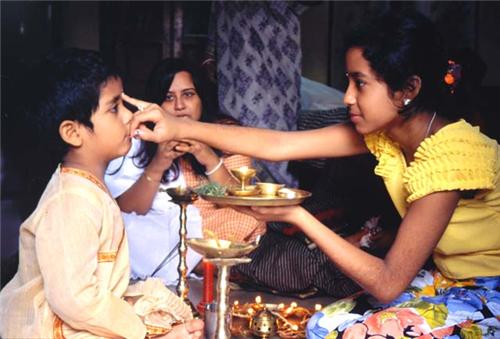 This festival is popular as Bhai Bij, Bhau-beej or Bhav Bij amongst the Marathi and Konkani speaking communities in the states of Maharashtra, Goa and Karnataka.In Maharashtra, the brother is made to sit in a special square shaped space on the floor drawn by the sister. Before sitting the brother is made to eat a bitter fruit called Karith. This custom is associated with the story that Lord Krishna tasted this fruit before he went on his mission to kill demon Narakasura. The highlight of this celebration is the delicious Basundi Puri or Shrikhand Puri. 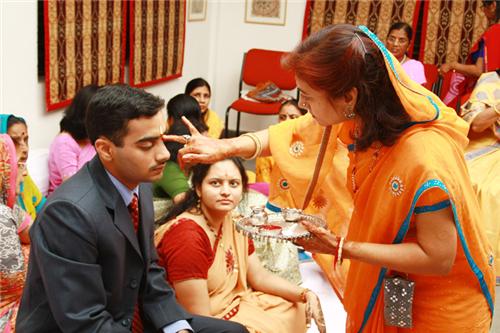 In Nepal Bhai Dooj is known as Bhai Tika and is celebrated by large number of people living there. In fact it is their second most important festival after Vijaya Dashami.