Kerala, with its winding stretches of backwaters, is famous for its native boat races held in different parts of the State in the harvest season. The Champakulam boat race is the first race during the season and has a tradition of centuries.

The festivities include spectacular water floats, decorated boats, Vanchipattu - the song of the oarsmen and the most thrilling Chundanvallom race. Chundans are a category of boats over 100 feet in length with raised prows. The foreign rulers first called them snake boats.The traditional annual boat race of Kerala begins in late June and early July at Champakulam. This festival is known as Moolam Vallamkali . Moolam signifies a Malayalam asterism (star or Nakshathram), Moolam of the month Mithunam.

The oldest and most popular snake boat race in Kerala, and is closely connected to the Sree Krishna Temple at Ambalappuzha. The race is held on the Champakulam Lake on the moolam day of the Malayalam month Midhunam, the day of the installation of the deity at the Temple. 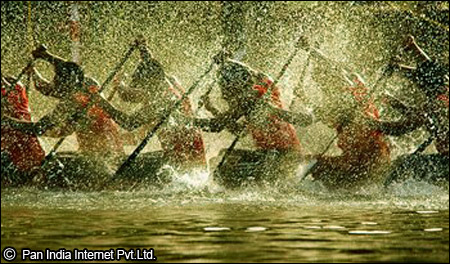 Legends say that Maharaja Devanarayana of Chempakasseri, as instructed by the royal priest, built a temple at Ambalappuzha. But just before the installation of the deity he was informed that the idol was not auspicious. The king was disturbed, but his minister suggested an inspired solution. To bring down the beautiful idol of Sree Krishna - presented to Arjuna by the Lord himself, from the Karikulam temple in Kurichi. The minister with a few others went to Kurichi, met the authorities there and returned with the idol.

On the way back they stopped at Champakulam to spent the night and perform a pooja. The next morning boats from the entire region assembled to escort the idol in a colourful, ceremonial procession through the lake to the Temple. Years later the pageant is still re-enacted with the same enthusiasm. An exotic procession of water floats, boats decorated with colourful parasols and performing arts greets the spectator before the race. The race proper is held in various stages for various categories of boats.