The modern civilization’s development that we all boast off today is somewhere the gift and blessing of Pandit Jawaharlal Nehru. Pandit Nehru was a perfect blend of eastern values and western thinking.

His life and works have influenced our way of thinking, social structures and all round development. Pundit Nehru always encouraged technological development of India.

He as a human being was very soft hearted person. Apart from being a great educationist, he was also a great poet and writer. His letters to his daughter Indira, has been compiled in a book which truly is a showcase of his philosophical outlook. 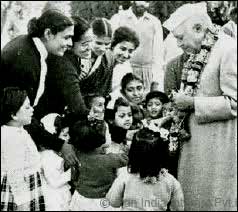 Some of the most famous works of Pandit Nehru include Glimpses of World History and Discovery of India’.

One can clearly say that modern society is a blessing of Pandit Jawaharlal Nehru, his aims, his teachings, his messages and his contribution whose fruits are still sweetening the development of India.