Here are some strange and shocking facts about children in India and all over the world: 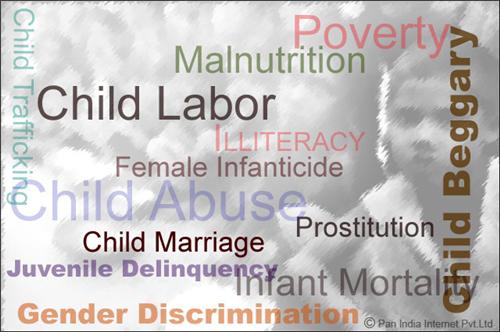 Each year 500,000+ children are forced into the sex trade with an annual increase of 10% Children are the future of a nation. Yet they have been neglected a lot in India, which is evident from the existence of infant mortality, child morbidity, child malnutrition, childhood disability, child abuse, child labor, child prostitution, street children, child beggary, child marriage, juvenile delinquency, drug addiction and illiteracy.

Childhood is the time when a person needs nurturing, schooling, time to play and explore the opportunity to grow both emotionally and physically. When a child is forced to work, it hampers his growth, stunts his psychological and intellectual development, and prevents him from realizing his full potential. Child labor is an unmitigated evil and any society which suffers from it should be grossly ashamed of it.

Child labor & trafficking are just symptoms. They are not the real problem. The problem lies elsewhere. Unless the root problem is countered, mere addressing of the symptom makes the situation immensely worse for the victimized children. In India, children’s vulnerabilities and exposure to violations of their protection rights remain spread and multiple in nature. There is a wide range of issues that adversely impact on children in India, making them especially vulnerable. With such future citizens in large numbers, the future of our country is bleak.

So, on this occasion of Children’s Day, please think. Are we worth celebrating a Children’s Day with the viral existence of such evil practices as child trafficking & child labor in our society?

Every citizen of the country should pledge and ensure that children around them are not forced to any sorts of exploitation. Little measures like getting a child educated, teaching children around you, being more active to the happenings around, can make a big difference in the current situation and condition of children in India.
Add comment
JComments