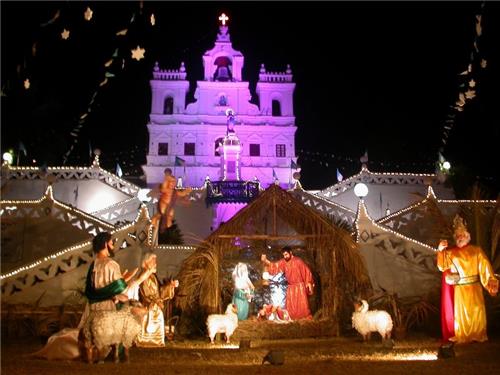 Christmas is celebrated on 25th December, every year, throughout the world. The enthusiasm and excitement during the Christmas and New Year season all over the world is best reflected in the gala events of Goa. People from around the world are drawn to this captivating paradise and arrangements are made to celebrate along with the natives. NRIs book their holidays in advance in order to enjoy the festivities with their loved ones.

Beaches of Goa come alive during the season and serve as the perfect venue for enjoying the lavish Christmas and New Year events. At midnight the New Year is welcomed with a magnificent display of fireworks that light up the night sky. Bonfire parties and evening parties along the beach side remain the top attraction of Goa. A number of musical events are organized at this time of the year.

Since, a major chunk of Goan population is formed by the Christian community, Christmas celebrations are an important event. It is a season that is loved by the Christians and non Christians alike. A foretaste of the festive season can be seen in the five star hotels where chefs start displaying mouth watering baked treats around this time.

Reputed brands announce huge discounts attracting the shoppers, who spare time from their busy schedule for indulging in retail therapy. People refurbish their homes, change the upholstery and decorate it in the best possible way to entertain guests on the occasion.
Another tradition in most Christian households is to plan their cribs. Goans are very creative and design some rare artistic cribs. Most of them recreate the Christmas scene, building castles of the three kings, the hut in which baby Jesus was born and the shepherds watching their flock seated near a bonfire. Others display the Sea of Galilee along with fishermen. It is also a time of solidarity for clubs so they spare no effort in display of large cribs at cross roads. These are spread over a large area, enabling the spectators to walk in. One is often pleasantly surprised at the aesthetics and creativity of these displays. People drop by in large numbers to appreciate them.

The colorful stars hanging from roof of every Goan household is another sight to behold. There are some people who make an extra effort to make a traditional star with bamboo frames and colored paper in their endeavor for the brightest star. Crib and star competitions are held during the season.

The bewitching beauty of the Goan churches is already world famous, but the glittering embellishments adorning these churches and the divine charm of the Christmas carols at this time contributes in enhancing it all the more.

Moreover, announcements of annual Carol Singing Competitions get choirs and singers all geared up. The choir groups practice so hard that on the performance day they almost recreate the Choir of Angels which announced the birth of Infant Jesus to the shepherds.
Housewives across Goa have the mammoth task of churning out a number of Christmas sweets. Doce, bebinca,neuros, kulkuls, gonce and many other traditional treats are prepared. This exercise involves a lot of shopping and plenty of slogging in the kitchen, if prepared in traditional manner over firewood. On the Christmas Eve or on Christmas day itself, they send out little baskets of these treats to their neighbors and friends.

The custom of sending the Christmas cards arouse the good old nostalgic memories and thankfully this trend is still in vogue among the Goans. Each card is personalized with a short Christmas message. Along with all these mundane preparations, devout Goan Catholics begin spiritual preparations as well. Following the advice of their local parish, they begin with small sacrifices like forgoing a movie, having a simple vegetarian diet instead of non-vegetarian on a Sunday lunch or giving up those new clothes for Christmas. The amount collected is then pooled by the church and on the Christmas Eve, the money is distributed amongst the impoverished in order to enable them to celebrate Christmas. This gesture recognizes the true spirit of the festival, which is to share the joy without any discrimination.