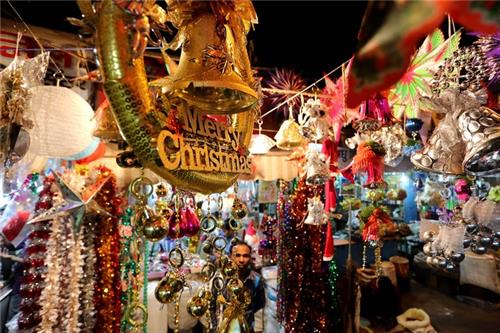 Christmas is also celebrated by Christians in India with equal enthusiasm as by the world community. Celebrations start from Christmas eve and continues till the New Year.

People go to a Church to participate in mass prayers organized by the Church to offer their thanks to Lord Jesus for their happiness and prosperity. People greet each other at the Church and take the blessings from the Father. Christmas is celebrated among Christians as Diwali is celebrated by Hindus. People decorate their houses with clay lamps, special carols are sung by the group.

Sometimes Banana tree and Mango leaves are also used to decorate the house. This is the most important and the gayest festival of the Christians. Other communities in India also look upon it as a festival of goodwill and greetings. During the British period it was celebrated on an All-India basis and the ten days from the Christmas Eve i.e. the evening of 24th December till after the New Year were declared as public holidays.

Children and youngsters look forward to Christmas holidays when they enjoy themselves to their heart s content. It was also during the British period that the Christian missions penetrated to the interior of India even to the tribal regions, resulting in the number of people who were converted to Christian faith. This resulted in the Christians becoming the third most important community in India.

Christmas Celebrations in Goa has a different fanfare associated with it. Christmas is one festival which witnesses the highest involvement of people from all religions. Dancing and parties is the highlight of Christmas celebration in Goa, with all the locals and tourists participating in it with delight. Eat, Drink, Dance and Celebrate is the motto of the people during the period. Gifts are exchanged, Carols are sung, which in all makes Goa look even more beautiful!
Add comment
JComments