Cochin Carnival is held in the last week of December every year. This carnival is held mostly during the last 10 days of the year which culminates with the arrival of New Year. The carnival which is held in Fort Kochi, Kerala, is one event which the whole of Kochi awaits eagerly every year. Cochin Carnival known for its public celebration, parades and parties attracts tourists not only from within the country but also from abroad. 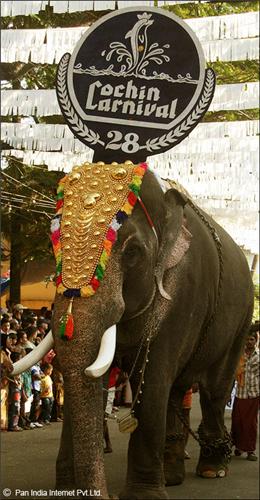 The origin of this colourful carnival dates back to the 16th century during the Portuguese rule in India. Cochin was the headquarters of the Portuguese in India. It was Portuguese who started this festival as a celebration to welcome the New Year. It is said that the Portuguese ruler’s New Year celebrations were marked with grand parties and fiestas. This tradition continued in the city and became part of the local culture. In the year 1984, the celebrations was bequeathed with the title of Cochin Carnival. When a person hear the name Cochin Carnival, the interesting fact that comes to his/her mind regarding this festival is about a merry making feast. Many of you may be thinking about the history of Cochin Carnival. Kerala people were familiar with the fact that the first Portuguese fortress in India was established at Cochin by Vasco-da-Gama. Cochin was ruled by this Portuguese from 1503-1663 respectively. At that time, New Year was celebrated grandly by those people. After the end of Portuguese rule in Kerala, the whole Kochi city participated in celebrations and started to make merry making. This is the history behind Cochin Carnival. Also remember that Cochin carnival is an occasion for all people to have fun. The cochin carnival is a festival where people of all age can enjoy.

Today Cochin Carnival is a grand celebration of culture and tradition of both past and present. It is an amalgamation of different cultures found in the region like Portuguese, Dutch, Gujarati, Konkani, Malayalee, Andhra, Kannada, Tamil, Arab, Punjabi and Anglo Indian culture. The aim of the Cochin Carnival is to promote and maintain five principles namely peace, progress, environment, participation and adventure. 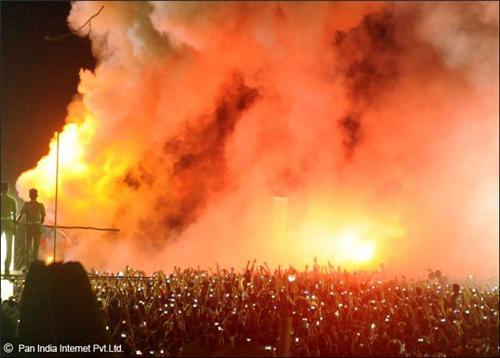 Fort Kochi puts on a festive look during this carnival. Hundreds of people clad in exotic coloured attires conglomerate at the venue to participate in this carnival of merry making and feasting. Several games like Kalam Vara (floor drawing), tug-of-war, bicycle races, swimming in sea, beach volleyball are major attractions during the carnival celebrations. Art shows, food festivals, colourful rallies and fairs add to the festive spirit of the carnival. The festivities and revelries continue till midnight of December 31st.

On the concluding day of the 10 day festival the entire city turns white with all buildings wearing white paper buntings. The white symbolizes peace and tranquillity. Many impromptu competitions and celebrations are held on the streets and fireworks mark the finale. On the New Year’s Day a procession led by grandly decorated elephants is organised. The procession is accompanied by drums and music, colourful floats, different folk art forms, Panchavadyam and this marks the end of the celebrations.

Nearly two lakh people from within and outside India are expected to pour into Fort Kochi, every year to witness the New Year carnival rally. Societal issues dominate the themes displayed at the annual rally, alongside the right mix of fun.

Members of the public, guests and tourism stakeholders of the region are generally happy at the enhanced security measures that are in place in connection with the carnival and the New Year revelry, every year. Through the past years there has been increased participation by women and children in the carnival and in the rally because of the steps taken to contain public nuisance and staging of obscenity.

The enhanced police presence and the surveillance cameras keeping tabs of different streets are always a deterrent to trouble makers since a few years.