Dhanteras is of great importance to the rich trading class. Goddess Lakshmi, the goddess of wealth is worshiped during Dhanteras. There are many legends attached with Dhanteras, but no matter what legend is believed in different parts of India, it remain the Festival of Wealth. 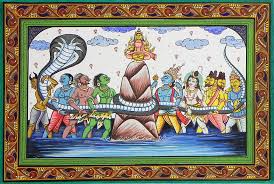 The most popular legend behind the Dhanteras is the story of the Dhanvantri emerging from the sea during Samudra Manthan.

Lord Indra, the king of all devtaas, was once going on his elephant, when he encountered a sage named Durvasa, who gave him a garland, a prasad of Sri (fortune). Lord Indra accepted the garland, but to prove that he was an egoistic God, he made his elephant wear it. The elephant, knowing how egoistic Lord Indra really was flipped thel garland to the ground. This angered Durvasa and he cursed Lord Indra that Lakshmi (the Goddess of fortune, wealth, energy and bravery) will leave him because owning all this had gotten to his head and he had become very egoistic. Because of this curse, Goddess Lakshmi left Indra and this made him very unhappy.

On seeing this opportunity, the asuras, led by the demon King Bali, got into a battle and defeated Lord Indra and the devtaas. The devtaas had to give up their kingdom as a result and were left with no powers. Bali triumphed and became the rulers of the universe.
In hopes of finding a solution, the devtaas approached Lord Vishnu for help and the only way to solve this situation was to churn the Sea of Milk for Amrita - the nectar of immortality. On having the nectar, the Gods will be powerful again and will be able to defeat the demons. But because it was an enormous task, Lord Vishnu suggested they get the help of the demons but handle them diplomatically and he would make sure that it was only the gods who would obtain the nectar in the end.

The devtaas approached the asuras and told them about the nectar, and that they would share it equally with them. The demigods and the demons formed and alliance, Mountain Mandara was used as the churning rod, while Vasuki - the king of the serpents, was used as the churning rope. The demigods on one side and the demons on the other, holding onto both ends of Vasuki, churned the sea alternatively. This came to be known as Samudra Manthan.

During the manthan, a number of different things came out of the sea and were alternately claimed by the demigods and the demons. First came a lethal poison, which to the relief of everyone, Shiv drank. Other celestial beings, like a wish granting cow, horse, apsaras (fairy beings). After a lot of encouragement from Vishnu, thy continued churning, and suddenly, from the midst of the sea, seated on a Lotus and wearing a garland, emerged Goddess Lakshmi., and at last emerged Dhanvantri, carrying ambrosia or the nectar in a jar. The demigods and demons were arguing about who will get it first, and Vishnu stepped in, tricked the demons, and gave the nectar to the demigods. The purpose of the Manthan was solved, Goddess Lakshmi had reappeared, and the demigods were powerful and immortal again.

This is the reason why Goddess Lakshmi is worshipped on Dhanteras, because she is a symbol of wealth and prosperity. 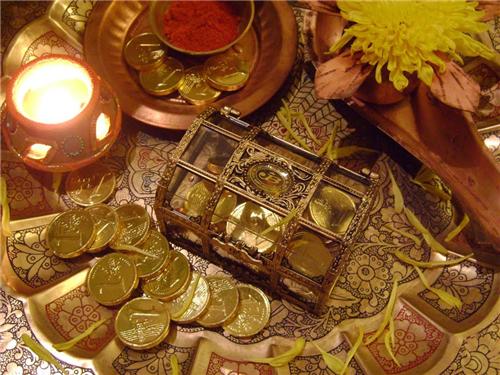 There is another very interesting legend about Dhanteras. It revolves around the story of King Hima’s sixteen-year-old son. According to horoscopes, it was prophesied that a snake would bite him on the fourth day of his marriage. On that particular day, his wife kept him awake the whole night to prevent him from the snakebite.

She laid out all her ornaments and gold and silver coins at the entrance of her bedroom. She lightened the room with lamps and did not allow her husband to leave the room.She sang the whole night and narrated stories to keep him awake.

When Lord Yama, the God of Death arrived in the guise of a serpent his eyes were blinded by the dazzle of the coins and the lights. He sat on the heap of coin, listened to the songs, and left peacefully the next morning. Thus, the young wife was successful in saving his husband from the jaws of death. Dhanteras is also known as Yamadeepan and the lamps are kept burning the whole night to keep away evil spirit from the homes.