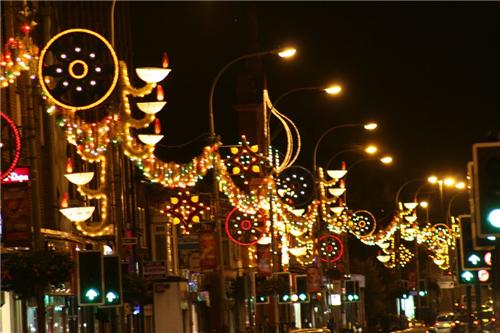 Millions of Indians around the world, celebrate the Indian festival of Diwali every year. It is festival that symbolizes the triumph of light over dark, good over evil. Diwali has also become a major festival in Canada. Celebrations take place in homes and temples from coast to coast in this month and week long events are organized for Indians as well as other countrymen.

Diwali is celebrated by Hindus, Sikhs and Jains alike. For Hindus, it marks the victory of Ramachandra, the seventh incarnation of the god Vishnu over the demon king Ravana. Legend has it that Ravana abducted lord Rama s wife Sita, so lord Rama had to battle the demon in order to set his wife free. He vanquished the demon and returned to Ayodhya after fourteen years of exile with his bride, Sita and brother Laxmana by his side. Their homecoming was celebrated by his people who lit clay lamps in their houses and streets.Till this day ,the Hindus light their homes to celebrate the triumph of good over evil as a symbol of inner light.

For Sikhs, the holiday marks the release of the sixth Guru Hargobind Ji and 52 other princes from the Gwalior Fort in 1619. According to another belief the first stone of the Golden Temple at Amritsar was laid during Diwali.In the Jain religion, Diwali honours the attainment of moksha or the liberation of the soul by Mahavira, one of the 24 Tirthankaras of the religion.

In Canada, celebrations are arranged in Vancouver, Calgary and Toronto. The Vishnu Mandir attracts thousands of followers. Cultural shows and events like Miss Diwali Queen are organised. The holiday is utilized for spending quality time with family and relishing Indian food like gulab jamuns, jalebis, ras malai, etc. At night people gather at the temple, participate in pooja and burst firecrackers. Diwali dinner is a lavish affair in some Indo- Canadian families. It is often a social get together including dance and musical events by professionals. According to a festival producer, the crowd can go upto 10,000 at a Diwali event. Although Bhangra music and Bollywood dancing are organized every year, but in some events African, Brazilian, Cuban and First Nations percussionists also participate. Therefore this festival is more of a multi-cultural event.