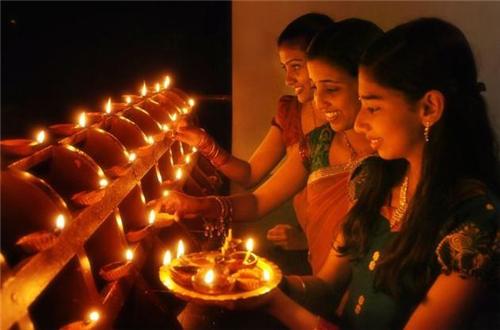 Unlike the rest of India, Diwali is not a major festival of Kerala. But, in recent times it is gaining popularity among the Kerala-ites.  Diwali is celebrated in Kerala in the same manner as the northern states of India, but at a much lower scale.

The growing population of the North Indians in Kerala, for whom Diwali is a very important and significant festival, are the reason for the increase in the scale of Diwali celebration in Kerala. However, for the natives of Kerala this festival isn’t as important as the local festivals like Onam.


However, not being important doesn’t mean it’s not celebrated at all. Although firecrackers are not appreciated or favored by the inhabitants-who love their peace and quiet, people do light diyas(clay or earthen lamps), decorate and offer prayers to Goddess Lakshmi and Lord Ganesh, like the rest of India.

The second day of Diwali, celebrated as Naraka Chaturdashi, hold more importance, as it celebrates Lord Krishna’s victory over the demon King Narkasura. On this day, the typical customs include everyone waking up early to perform the rituals. People put oil on their bodies and then have a bath. In Kerala, there is a custom to prepare jaggery with ginger, and offer it to Lord Dhanwantri (considered the Lord of Ayurveda) and then distributed as prashad (holy offering). Dhanatrayodashi is observed a day before Diwali in Kerala.

The North-Indian population of Kerala observes Diwali in the same manner as their home states. New clothes, shopping, firecrackers, sweets, prayers, diyas and lights and whole lot of preparations and celebrations are all a part of the Diwali celebrations, especially in the cities.
Add comment
JComments