Punjab as a state is a tantamount of fervor, zeal, and emotions. The zest to celebrate festivals with  a heart warming enthusiasm and eagerness runs in the blood of Punjab. The larger-than-life attitudes of the inhabitants remains unmatched till date.

Although Punjab has a massive population of Sikhs, Diwali – a festival of Hindus is widely recognized and celebrated. That is the essence of a festival in India; it unites families, relatives and members of all castes and creed. People forget their differences, worries of the humdrum lives and join in the celebrations and festivities.

Sikhs in Punjab and all over celebrate Diwali for a reason significant to their religion. Diwali coincides with a Sikh festival Bandi Chhor Diwas and is celebrated in a manner similar to Diwali. Diwali was celebrated in Punjab earlier, but it didn’t hold the same importance to Sikhs as it does now.

The calendar for Diwali 2020 celebrations in Punjab is as follows:

Significance of Diwali in Punjab

It’s said that Guru Hargobind and fifty two other prince of significant states of India had been taken prisoner by Emperor Jehangir, of the Mughal dynasty. Hargobind Ji demanded for his freedom to be granted on Diwali, and Jahangir complied with him. At this Guru Hargobind demanded the release of the Hindu princes along with his release. Jahangir agreed to that too, but put a condition that only the prisoners who could hold on to Hargobind Ji’s cloak would be allowed to go, thinking it impossible for 52 people to hold on the one cloak. After hearing of this condition, Guru Hargobind had a special cloak with 52 strings - for each of the princes, designed. It is believed that it was on Diwali that Guru Hargobind Ji walked out of the prison with the 52 princes holding onto the strings on his cloak. 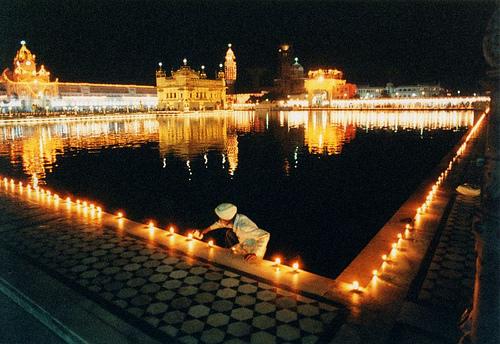 This is a historic day and is referred to as Bandi Chhor Diwas, especially for the Sikh community of Punjab. The festival of Diwali is celebrated as the anniversary of the release of Guru Hargobindji. The tradition to light lamps on Diwali is a way to pay respect to god for the attainment of peace, prosperity, health and knowledge.

In Punjab, preparations for Diwali begin at least a month in advance as people start to clean their houses to get ready for the big day. Most of the tradition and customs of Diwali are the same. Rangoli, lights and diyas (earthen lamps), fairs and festivities are all a part of celebrations.

In the interiors of Punjab, villagers worship cattle on Diwali, as cows are considered holy and the main source of income for farmers. The day following Diwali is celebrated as Tika day, popularly known as Bhai Dooj in the rest of the country. On this day, sisters put a tika (red mark) on their brother’s foreheads and pray for their health and success.

The Golden Temple of Amritsar is a sight for the eye during Diwali. It is beautifully decorated and lit up and this image is perfectly reflected in the lake adjacent to the temple adding to its majestic appeal.

This overwhelming picture is accompanied by constant chanting of prayers on the evening of Diwali adding to the calm and serenity presented by the Golden Temple. After the prayers, professionals meant for this task according to the traditions and customs burst firecrackers adding to festivities and celebrations.
Add comment
JComments