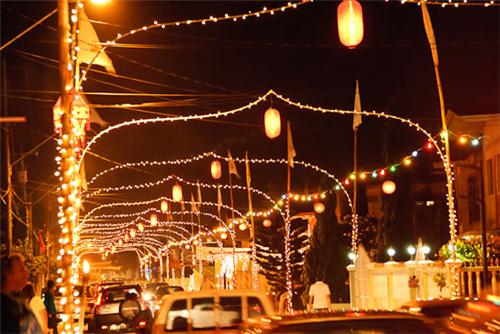 Deepavali or Diwali, is one of the most popular festivals of Hindus. It is also one of the most eagerly awaited festivals by the Indians around the world. It is believed that the festival of Diwali commemorates the return of Lord Rama to Ayodhya. After spending fourteen years in the forest of Dandaka and defeating the demon king Ravana, when Rama returned to Ayodhya, people were over joyed by the news of his arrival and started the tradition of Diwali by celebrating the day with lights and lamps.

As the name suggests, Diwali is celebrated with lights and lamps, firecrackers and joyous activity. People consider the festival as an opportunity to explore new relationships and strengthen existing ones. Diwali is celebrated in various parts of the world, in countries such as Nepal, Australia, Singapore, Malaysia, Caribbean, Thailand, Unites States of America and all the other countries with a considerable Indian population.

The Diwali celebration has a unique flavor in the Caribbean Island nation. Today much of Trinidad and Tobago s 1.3 million citizens are of African origin, but around half the population traces its roots to India, when laborers were brought in the second half of the 19th century to work in the sugarcane plantations following the abolition of slavery.

Late Pundit Jankie Persad Sharma, a pioneer of the Hindu religion and culture in Trinidad and Tobago is credited with having begun the Diwali celebrations on the Caribbean island, he was also responsible for the building of several prominent temples and was known for organizing trips to India for the Indian migrants. Therefore, today the Indian community in the Caribbean is in a better place. Kamla Persad-Bissessar, the country s first female prime minister, is of Indian descent, which reflects on the Indian community’s progress.

The National Council for Indian Cultures sponsors the Diwali celebration every year. There are scores of stalls set up for selling Indian apparel, jewellery, handbags, cosmetics, stuffed animals, fireworks, and food such as the spicy curry of chick peas served with breads, jalebis, gulab jamun etc. The count can go up to 20,000 people during the event. The celebrations also have an official imprint as the Ministers of the Government also participate in the celebrations sometimes, where the Prime Minister addresses the community.

A stage show is set up which is attended by VIPs, which includes traditional Indian dances, musical programs with sitars, tabla and Indian pop groups. Collectively the various performances offer a unique opportunity to experience Hindu cultures abroad. An evening is also dedicated to Indian-themed fashion show on the island. These events are a fundraiser for the Prime Minister s Children s Life Fund, which raises money to provide medical care for the impoverished children. The community celebrates the true spirit of the festival i.e sharing of joy and happiness.
Add comment
JComments