Custom of Rangoli on Diwali 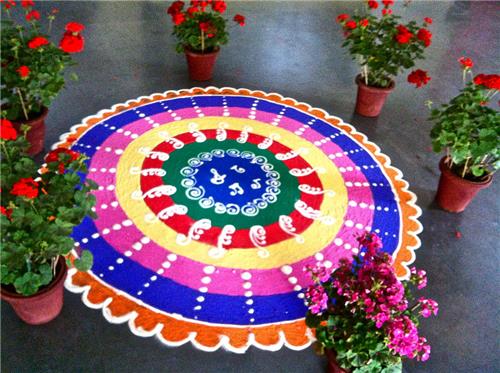 Rangoli is the celebration of colours since it has originated from the words Rang which means color and Holi which means celebration. The art of rangoli is known by different names in different regions such as Ossa in Orissa, purna in Uttar Pradesh, mandna in Rajasthan, aripana in Bihar, Rangvalli in Maharashtra, Kollam in Tamil Nadu, muggu in Andhra Pradesh, alikhthap in Kumaon, kolam in Kerala, and saathiya in Gujarat. Decoration is a major part of every Indian festival and no celebration is complete without colours.

Why do people make Rangoli on Diwali ?

What makes the Diwali rituals even better is the fact that they have a deeper spiritual meaning than just superficial joy. According to a legend God, in one of his creative adventures, extracted the juice from one of the mango trees as paint, and drew the figure of a woman so beautiful that it put the heavenly maidens to shame. Since then rangoli is used for depicting beautiful forms.

Similarly, besides the mundane purpose of beautification the main purpose of making rangoli on Diwali is to welcome Goddess Lakshmi (the goddess of wealth), to individual homes apart from warding off the evil eye. Moreover, these intricate designs do not just promote harmony among different elements of the universe. They encourage peace and harmony within us. Symmetry is the reason behind this influence. Every element of nature and the universe dwells on symmetry. Therefore, traditional rangoli designs are always symmetric and have enormous influence on the mind.

There is another notion about the rangoli designs. Rangoli patterns are something which remind us about our mortality. A light breeze and all the hard work is gone. Only the remains of the drawing on the ground are seen like the dead story of our living existence. Therefore, it can be observed that  the simple ritual of rangoli holds a deeper meaning if it is analysed deeply.

What are the common colors used in a Rangoli?

Designed with a beautiful combination of various colors, the Rangoli images create an enchanting piece of art. It is basically a floor painting, an image that stands for a sign of welcome. The material used for making rangoli are Turmeric, kumkum, rice solution, dried powder made from the leaves , charcoal, burned soil , wood sawdust etc. Traditionally, the white powder which is used to draw lines and dots is nothing but powdered rice. These serve the purpose of inviting insects and birds for food and symbolize coexistence among different life forms.

Another symbol of prosperity is the colour yellow. Turmeric which is yellow in colour is often used to fill in the white outlines. Sometimes, kumkum or vermilion is also used which is considered auspicious.

When coloured powder such as chilli, turmeric, kumkum etc. are used to enhance the white powder creations the rangoli converts into a flat 2-D like appearance. Whereas a 3-D effect in rangoli can be obtained when cereals, pulses either in their natural colouring or tinted with natural dyes are used to embellish the look. Petals, pulses, grains, beads, flowers, fabric colour, marble dust  are also used to achieve the desired effects.

Initially, colours were traditionally derived from natural dyes - from barks of trees, leaves, indigo, etc. These days, synthetic dyes are used in a variety of bright colours. This powder is used directly for fancy decorations, but for detailed work, generally the material is a coarse grained powder base into which colours are mixed. The base is chosen to be coarse so that it can be sprinkled with good control. The base can be sand, marble dust, saw dust, brick dust or other materials. The colours generally are very fine pigmented powders like gulal/aabir used during the Holi festival or colours specially sold for rangoli in South India. Powder colours can be simply mixed into the base.

If the base is light like saw dust, it can be used to make floating rangolis on the surface of still water. Sometimes saw-dust or sand is soaked into water based colours and dried to give various tints. If a rangoli is to be made on water, the colour should preferably be insoluble in water.

Candles and lamps are also placed along the rangoli in the hope that Lakshmi, the goddess of wealth and prosperity, will visit and bring good fortune and blessings to the family.

Rangoli is a traditional Indian folk-art typically made at the entrances of Hindu temples and homes in India as well as abroad. Such floor decoration is done on any occasion that is good enough — religious festivals, weddings, birthday parties, opening ceremonies etc. Decorating the entrance of individual homes with Diwali rangolis is a common practice during this festival. In order to welcome Goddess Laxmi small footprints are made at the main entrance of the home or near the place of worship, which signifies showering of good luck and prosperity on the family residing in such a well decorated home.

Women also create a number of rangoli pattern in every corner of the dwelling space, with multiple  desi  to honour Goddess Lakshmi. Generally,traditional rangoli designs are symmetric and proportioned, though this concept has changed over time and different themes are being explored. Rangolis can range from the size of a doormat, to the size of an entire room.

The motifs in traditional Rangoli are usually inspired from Nature - peacocks, swans, mango, flowers, creepers, etc. The designs are symbolic and common to the entire country, and can include geometrical patterns, with lines, dots, squares, circles, triangles; the swastika, lotus, trident, fish, conch shell, footprints, creepers, leaves, trees, flowers, animals etc. These motifs often are modified to fit in with the local images and rhythms.

The Sri Chakra rangoli is an example of a traditional form of the art. It is a geometrical figure, which has many intertwined triangles, and is considered the symbolic representation of the Goddess. In many parts of southern India , the Sri Chakra kolam is drawn elaborately, a lamp is lit, and the sacred 1,000 names of the Goddess are chanted. Another well-known sacred rangoli is the Hridaya Kamalam or Lotus Heart.

Rangoli in Different Regions of India

In Bengal, the floor art is called Alpana . The white designs known as Alpana are found on the floors, walls and on large pots. Rice, is the medium used in Alpana and the technique of painting using the white flour is known as Dhulichitra

One of the common methods of drawing Alpana is by creating a paste from the rice powder. The rice powder is mixed with water to create a thick paste. Occasionally, colored dyes are also added to the white paste.

Rangoli is made extensively in this state during the Festival of Lights, Diwali. During Diwali, people take time for cleaning and decoration of their houses, in order to please the Goddess of Wealth . So, all the houses are lit up with lamps and every corner of the house is decorated. Some of the popular themes of Diwali rangoli are the signs of Om, swastika, leaves of Ashoka tree, , lighted diyas, shree, mangal kalash, lotus and other flowers.

Kolam,which is made of rice flour is generally drawn at the entrance of a house or any other building.  The rice powder is said to invite birds and insects to eat it, thus inviting other beings into one s home, a daily tribute to harmonious co-existence. It is a sign of invitation to welcome all into the home. The patterns range between geometric and mathematical lines drawn around a matrix of dots to free form art work and closed shapes. Folklore has evolved to mandate that the lines must be completed so as to keep evil spirits away. The design consists of dotted symmetry, 9 Goddesses Swastika Kolam within a single cycle.

These days, there are several gadgets and design books to help the novice obtain near perfect rangolis - there are rollers, hollow tin rollers with handles and designs drilled on the surface, to be filled with rice powder and used effortlessly across steps in diagonal lines to produce intricately designed rangolis. There are also plastic and metal trays, stencils or templates, sieve like trays with different rangoli designs on them to create instant rangoli. There are also the rangoli stickers which can be stuck anywhere.

Therefore, the coming generation can efficiently stay in touch with their roots by using modern day techniques.