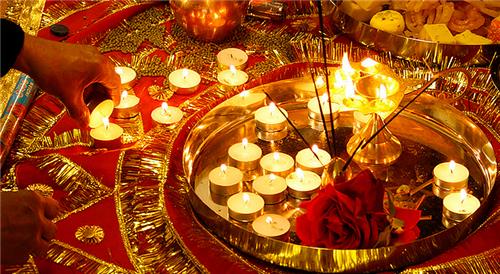 Aside from being one of the most important festivals for Hindus, Diwali is important in other religions as well. Jainism, Sikhism and Buddhism all celebrate Diwali for reasons, significant to their religion. Hindu’s celebrate Diwali as the day Lord Ram returned to Ayodhya while for Jains, Diwali is the day Lord Mahavira attained enlightenment. For Sikhs, Diwali signifies the day Guru Har Gobind, the sixth guru was released from imprisonment and Buddhists celebrate this day as the day Emperor Ashoka converted and adopted Buddhism.

Significance of Diwali in Hinduism

For Hindus, Diwali is one of the most important festivals of the year. It is associated with the return of Lord Rama with his wife Sita and Lord Lakshman to Ayodhya, after 14 years of exile from his Kingdom on the orders of his father, King Dashratha and the victory over the demon Ravana.

On that day, he was welcomed to the kingdom of Ayodhya with rows of Deep, lightened throughout the kingdom. Thus, there is a tradition of lighting oil lamps that symbolize the victory of good over evil and freedom from spiritual darkness.

Hindus, also make preparations to welcome goddess Lakshmi by drawing Rangoli, and Paduka (footsteps) on the entrance that would allure goddess Laxmi to visit one’s home and bring prosperity along with her.

Significance of Diwali in Jainism

Diwali is very significant to Jainism. It is said that Lord Mahavira – 24th and the last Jain Tirthankar of the era, attained Nirvana or Moksha (enlightenment) on this day, in 527 B.C in Pavapuri, Bihar. Hence, this day signifies the freedom from spiritual darkness and liberation of the soul from all the past karma and ill deeds. This is a big day in Jainism, for Lord Mahavira, if not the founder, he was one of the biggest propagators and reformers of Jainism.

Lord Mahavira was born in a royal family of Bihar. At the ages of 30, he left his family and home and traveled around India in search of spiritual awakening and enlightenment. He meditated and served severe penance for 12 years after which his soul was illuminated and he achieved his goal. It is believed that Diwali was the day, when this event took place.

Jains celebrate the day after Diwali as the New Years Day. Lord Ganadhar, who was the most dedicated and devoted worshipper of Mahavira, attained enlightenment on this day.  After Lord Mahavira attained enlightenment, Swami Ganadhar mourned at the absence of his lord. His lament was so heartfelt, that on the next day itself, his soul was free of all human desires and karma’s and he achieved the Ultimate Knowledge. Therefore, the day after Diwali – the first day of Kartik month, signifies the turning on a new leaf in ones life or the ‘New Year of a New Life’.

Significance of Diwali in Sikhism 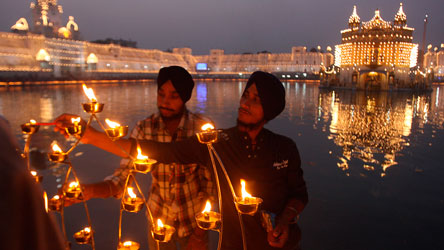 The festival of Diwali is equally significant in Sikhism in accordance with the release of Guru Har Gobind Ji – the sixth guru of Sikhism. Although Sikhs had been celebrating Diwali for many years, the importance of the Diwali increased with this event.

It is also believed that the third Sikh Guru, Amar Das, had laid the foundation stone for the Golden Temple on Diwali.

Emperor Jahangir had imprisoned him and 52 other Hindu princes. When Har Gobind ji was asked to be released on this day, Jahangir agreed. He then demanded that the other princes be released too, Jahangir agreed to that as well but in order to limit the people who could leave the prison, he put a condition that only the princes who could catch on to Har Gobind ji’s cloak could leave. At this, Guru Har Gobind Ji had a special cloak made with 52 strings for each of the princes and left the prison with every one of the princes holding onto it, on Diwali.

The Golden Temple was lit up in his honour, and it was the first place he visited after his release. Amritsar was a picture of celebrations, with the entire city illuminated with lamps and lights, to welcome him. Diwali came to be celebrated as Bandi Chhor Diwas by Sikhs due to this historic incident.Till today this tradition of lighting up the Golden Temple is followed on Diwali, a day of celebrations for the Sikhs.

Significance of Diwali in Buddhism

While not a large occasion for the Buddhist community, it is a cause of celebrations, Emperor Ashoka is remembered on this day, as he is said to have converted to Buddhism on Diwali. Due to this belief, Diwali is also referred to as Ashoka Vijayadashami in Buddhism.

This is a special day, particularly for the Newar Buddhists, who celebrate Diwali in a quite way, by chanting mantras. Buddhist temples and monasteries are decorated and Buddha is worshipped wholeheartedly and with great devotion on this day.