Durga Puja is one of the most important festivals in India. It refers to all the six days observed as Mahalaya, Shasthi, Maha Saptami, Maha Ashtami, Maha Navami and Vijayadashami.  More than just a festival Durga Puja is a celebration of life, culture, popular customs and traditions. It is a time of reunion and rejuvenation to love, to share and to care. 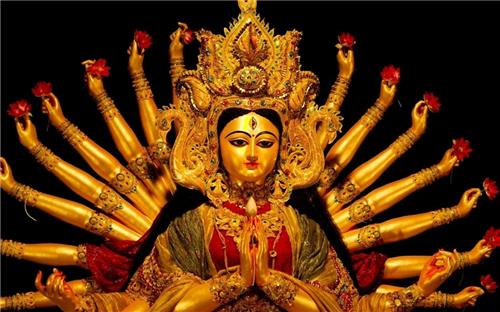 Durga Puja is an important Hindu Festival celebrated all over India with different rituals and festivities especially in the eastern region covering the states of West Bengal, Assam, Bihar, Jharkhand, Orissa and Tripura. In West Bengal and Tripura, which has majority of Bengali Hindus it is the biggest festival of the year. Apart from eastern India, Durga Puja is also celebrated in Delhi, Uttar Pradesh, Maharashtra, Gujarat, Punjab, Kashmir, Karnataka and Kerala. It is celebrated in the month of September/October every year.

This festival involves the worship of Shakti i.e Goddess Durga. The legend Shakti lays back to the story of Mahisasur, a powerful daemon also known as the Buffalo Daemon. Through years of intense praying and worship he got boon from Lord Brahma that no power could him making him invincible. But once the divine powers were bestowed upon him, he started ravaging the whole world and killing people and eventually wanted to uproot the Gods too. The Gods, in dismay, combined their powers to create a beautiful maiden, and each placed his or her most potent weapon in one of her ten hands riding a lion. Durga killed Mahisasur and won the heaven back for the Gods.

Her return in each year in the Bengali month of Aswin (September-October) commemorates Rama s invocation of the goddess Durga before he went into battle with Ravana.

Durga Puja is celebrated as one of the biggest festival in Bengal and is also most significant sociocultural event in Bengali society.

Durga Puja, as the name suggests is celebrated in honor of Goddess Durga, who had the divine power of fighting and killing everything evil. This festival is celebrated on the basis of the legend of Durga Maa s triumph over the invincible demon buffalo King Mahishasura. Click here to read the complete story behind Durga Puja celebrations.

How is Durga Puja Performed?

Durga Maa is worshiped in varied ways in different regions of India. There are various customs and rituals that are observed during Durga Puja, and certain preparations and process has to followed to perform the Puja.

Click on the following links to get details on How to do Durga Puja:

Rituals and Customs of Durga Puja 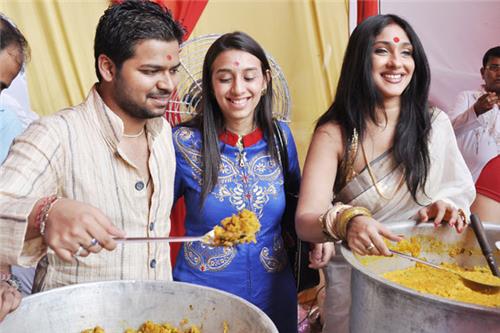 Durga Puja sees a variety of special food preparations over the six days of celebrations. There are special dishes, especially sweet dishes prepared on Durga Puja as food is a very important part of any festival or celebration anywhere in India. Click here to get recipes on some of the delicacies of Durga Puja