Delhi is well connected by air, rail and road and Garden of Five Senses can be easily reached by Metro and buses from all corners of Delhi.

Delhi is the main gateway city for northern India. Indira Gandhi International Airport is located at 23km southwest of Central Delhi and the domestic terminal at Palam is 5km away from the international terminal. Many national and international flights connect Delhi to other cities of India and abroad. One can take a bus, metro or a cab from airport to the Garden Of Five Senses. 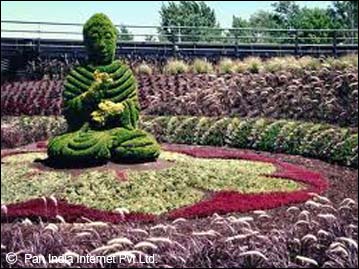 Buses from all the major places in Uttar Pradesh, Punjab, Haryana, Himachal Pradesh, Madhya Pradesh and Rajasthan are available for Delhi. People commuting locally can either opt for a bus or metro. The garden is located on the Mehrauli-Badarpur road and the nearest metro station would be Saket Metro Station.