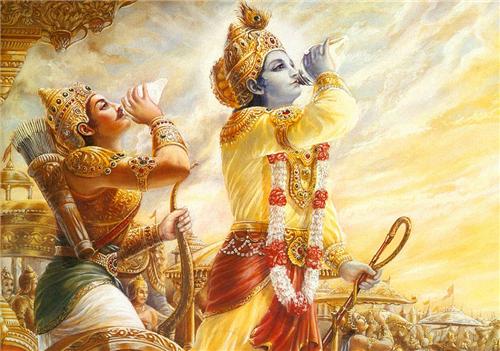 Kurukshetra is inseparable when one talks about the Indian culture and Hindu mythology. Indeed Kurukshetra is believed to be the land where the essence of real Hinduism found place.

It is in this same land that the famous sage Manu wrote the Manusmriti. Not only that, but the Rig Veda and the Sama Veda were also composed here. The land was visited by divine personalities like Lord Krishna, Gautama Buddha and some eminent Sikh Gurus.

Srimad Bhagwad Gita has since its inception been the philosophical guide and spiritual teacher for Hindus. In Gita, Lord Krishna has taught numerous lessons to Arjuna, one of the Pandavas which are considered to be ideal means of living one’s life. One of the most famous teachings of Gita followed since ages says "one should selflessly perform one’s duties and karma, not worrying about the outcome". Gita according to the Hindu Mythology provides solution for every problem that a man faces in his life.


During the Geeta Jayanti Samaroh devotees and pilgrims from all over India gather here in Kurukshetra to take part in this sacred festival. A normal ritual observed to be followed by everyone is to take bath in holy water of the sacred tanks - Sannihit Sarovar and Brahma Sarovar. The whole environment becomes divine and spiritual with numerous activities being organized. Celebrated in the month of November - December, the fair lasts for about a week and the major attractions for the visitors are Shloka recital, dance, Bhagwad Katha reading, Bhajans, dramas and book exhibitions.

Over the years Gita Jayanti Samaroh has gained immense importance and popularity especially among the Hindu Community. A large number of tourists have started to visit Kurukshetra during the event to participate in this sacred fair.