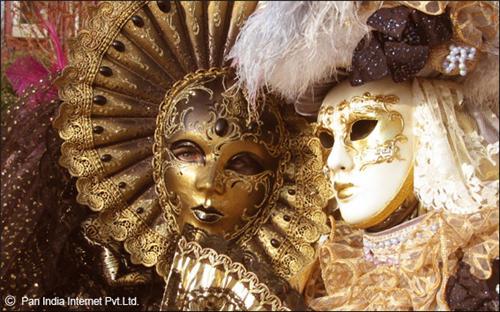 February heralds the carnival at Goa. For three days and nights the streets come alive with lights and color. Held in mid February, the week-long event is a time for lively processions, floats, the strumming of guitars, graceful dances and non-stop festivity. Goa festival is one of the famous Indian Carnivals as it is a complete sell out in terms of tourism capacities.

The Carnival’ is exclusive and unique to Goa, and was introduced by the Portuguese, who ruled Goa for over five hundred years. The word Carnival (Carnival in Portuguese) is derived from a Latin word meaning- ‘to take away meat’ and it is an expression of the 40-day period of fasting for Lent, during which, abstinence from meat is compulsory.

Earlier, the festival was generally meant for the Christians residing in Goa but now it attracts a lot of people from around the globe. The streets become lively with the traditional carnival costumes, floats, strumming of guitars, western dance forms, etc.

The carnival kicks of in February for three days and nights, when the legendary King Momo takes over the state and the streets blaze with music and color.

Huge parades are organized across the state with glittering floats, bands, and dance performances on the streets throughout the night. Also, grand balls are held during the evenings. The carnival includes of a famous red-and-black dance which is organised by the Club National in Panaji on the final day of the Carnival.

The carnival is not celebrated anywhere else in India and was in decline even in Goa during the last few years of Portuguese rule. Its revival with the liberation of Goa, and a boost to its tourism was therefore welcome. From being almost on the brink of decline, this three day festival of gay abandon and riotous revelry now attracts thousands of tourists to Goa from all over India every year!

The origins and nature of the carnival can be traced to the hedonistic feasts of ancient Rome and Greece. These carnivals started in the Spanish and Portuguese colonies, and gradually became known for their singing, dancing and drinking. The carnival is presided over by King Momo, who on the opening day orders his subjects to party.