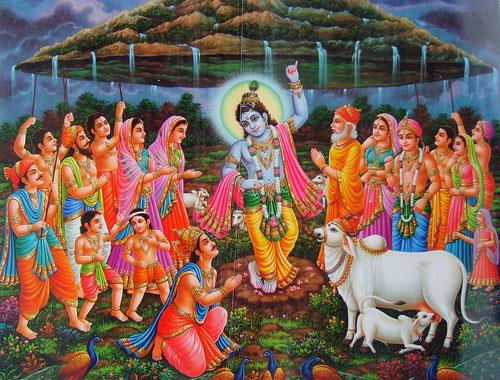 Govardhan Puja is also known as the Annakut puja meaning a pile of grains. It is celebrated to commemorate the lifting of Mount Govardhan by lord Krishna . According to a legend in Vishnu Puran, before Lord Krishna was born, Lord Indra, the god of rain, was the chief deity of Vraj. Lord Krishna instigated the people to stop worshiping Indra. Indra wanted to prove his power over Krishna so he brought about a cloud-burst which flooded the area for many days. People were afraid that the downpour was a result of Lord Indra s wrath. That was when Krishna came forward and lifted Mount Govardhan as an umbrella on the little finger of his right hand so that everyone could take shelter from the rain. Its because of this incident that he got the epithet Govardhandhari.


Since that day Govardhan or Annakut puja is performed with immense passion and eagerness in various states of India such as Punjab, Haryana, Uttar Pradesh and Bihar. On individual level at home people smear their body with oil and take baths in the morning. Thereafter, Govardhan Puja (Annakoot Puja) is done. Govardhan made of grains is called Annakut. It is worshiped with the offerings of paadya arghyay, gandh, pushp, dhoop, deep, naivedya, aachman, taambool and dakshina respectively.

The devotees keep awake the whole night and cook 56 or 108 different types of food for the bhog (the offering of food) to Krishna. In the temples of Mathura and Nathdwara, the deities are given milk baths, dressed in new attire and adorned with ornaments of diamonds, pearls, rubies amd other precious stones and metals. Then they are worshiped and offered various types of food –sweets, cereals, pulses, fruit, vegetables, chutneys, pickles and salads.

In some states Govardhan Puja is celebrated by making the hillocks of cow dung which represents the Mount Govardhan. Then it is decorated with flowers. Devotees circumambulate the hillocks and pray to Lord Govardhan to save their life as always. In some places it is celebrated as Padwa and Gudi Padwa.

The fourth day of Diwali celebrations is also celebrated as Kartik Shuddh Padwa, which is  the day when  King Bali came out of the Pataal Lok, the nether land and ruler of the Bhoo Lok, the world as per the blessing given to him by Lord Vishnu. Therefore this day is also known as Bali Padyami or Bali Pratipada. Padwa also marks the coronation of King Vikramaditya. At some places it is enjoyed as a new year because the Vikram Samvat was started from this day.

On the fourth day there is another custom in which the wife applies tilak or tika on her husband s forehead, performs his aarti and prays for his long life. In return the husband gives her a gift to reciprocate her love. Thus, the Gudi Padwa  celebrates the bond of love and respect between a married couple. People invite their newly married daughters with their husbands on this day for family meals and shower them with gifts. Read More Here.