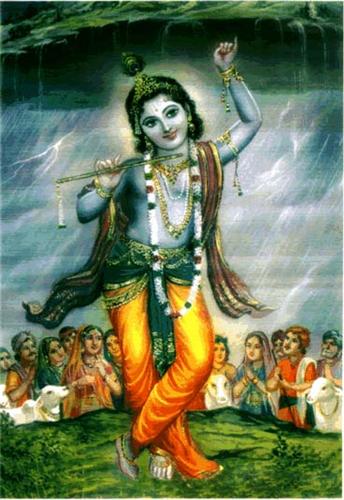 This day is celebrated as Govardhan Puja in the northern states of Uttar Pradesh, Bihar, Punjab and Haryana whereas in the regions of Maharashtra it is celebrated as Bali Pratipada. The legends behind these celebrations are as follows:

According to Hindu mythology the people of Gokul used to celebrate a sacrificial festival in honor of Indra Dev (the lord of rain). They worshiped Indra Dev at the end of every monsoon. But one particular year the young Krishna stopped them from offering prayers and sacrifice to Lord Indra who in terrific anger sent a deluge to submerge Gokul. People were afraid that the downpour was a result of their neglect of Indra. But Krishna assured them that no harm would fall on them. He lifted Mount Govardhan with his little finger and sheltered men and animals from the rain. This gave him the nick-name Govardhandhari. After this, Indra accepted the supremacy of Lord Krishna. 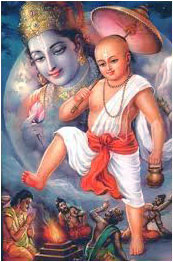 The same day is celebrated as Bali Pratipada or Bali Padva in the regions of Maharashtra. The day commemorates victory of Vamana, an incarnation of Lord Vishnu, over King Bali. The myths says that Vamana pushed the powerful but arrogant King Bali into Patal Lok (the underworld). It is believed that due to boon given by Lord Vamana, Asura King Bali visits the Prithvi Lok from the Patala Lok on this day.