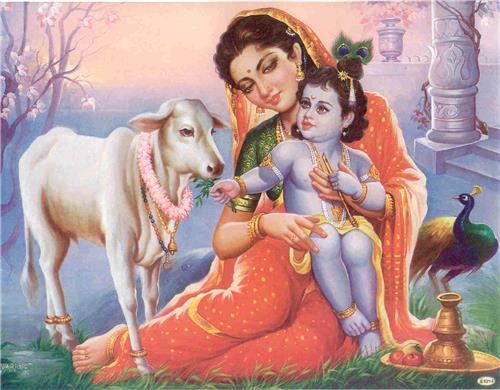 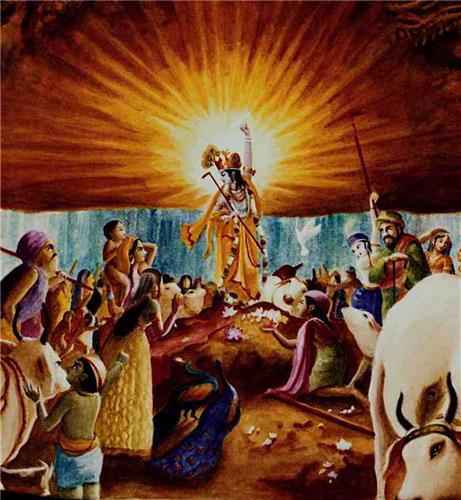 There was a Sahukaar’s daughter who used to water the Peepal tree everyday. Lakshmi ji used to appear from the tree and would ask the girl to become her friend. One day the girl told Lakshmiji that she would seek her father s permission. The father advised his daughter to become Lakshmiji’s friend as she was Devi personified. The next day when Lakshmiji asked the girl again to become her friend she agreed and both became friends. Lakshmiji invited the girl to her house for a meal. After getting her father’s permission, she went to Lakshmiji’s house.

There she was made to sit on a golden chowki and was served a sumptuous meal in vessels made of gold. Lakshmiji gifted her with a shawl, gold coins and ornaments. As she was leaving for her house, Lakshmiji caught hold of her pallu and asked to be invited to her house. When the girl returned home, the Sahukaar found her looking sad and asked her for the reason. The daughter explained her dilemma saying Lakshmiji wanted to come to their house. She was sad because they would be unable to reciprocate the lavish hospitality extended by Lakshmiji.

The father asked her not to worry and said they would offer Lakshmiji whatever they had. The Sahukaar then asked his daughter to smear the floor with cow dung, light a lamp in a corner of the house, place a laddoo next to it and sit there chanting Lakshmiji’s name. As she was chanting, an eagle brought a costly diamond necklace belonging to the Rani and on seeing the laddoo dropped the necklace there and took the laddoo away. The daughter sold the necklace and with that money , bought a gold chowki, gold utensils, gold coins, shawls and prepared sumptuous food. The daughter invited Lakshmiji for dinner. The daughter placed the gold chowki and requested Lakshmiji to sit down. Lakshmiji declined explaining that even in the Raja’s palace she would not sit as she has to be on the move all the time for good of the world. The girl insisted that Lakshmiji should sit saying she wanted to prove to her family that Lakshmiji was her friend. Lakshmiji agreed to her request and sat down. The girl served her with lots of love and devotion.

Lakshmiji was very pleased and presented the girl with great wealth. After a while, the girl told Lakshmiji that she had to go out and requested that Lakshmiji should wait until she returned. The daughter did not come back and Lakshmiji continued to wait for her in her father’s house. As a result, the Sahukaar’s home was always filled with wealth and Lakshmiji’s blessings. Lakshmiji, as you blessed the Sahukaars’s daughter with wealth and sat in her house so also bless the narrator of the katha, listener and followers of the katha along with their families. Bindaayakji /Ganeshji ki Katha is read after one reads the festival katha. A few grains of rice are kept in the hand while listening to the katha, After completion of the katha, the rice grains are left in the water of the kalash, kept for puja.