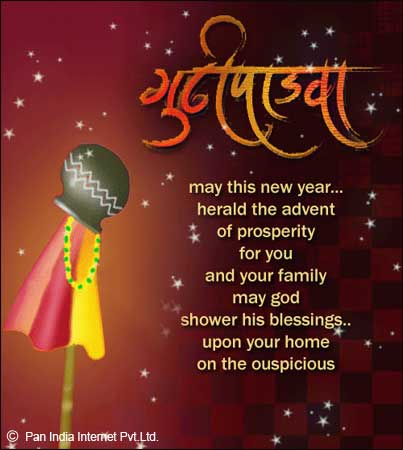 Ugadi or Gudi Padwa (गुढी पाडवा) marks the beginning of New Year in Maharashtra, Andhra Pradesh and parts of Karnataka. This festival is known as Gudi Padwa or Gudhi Padva in Maharashtra and Ugadi in Karnataka and Andhra Pradesh. It has become a custom to hold Kavi Sammelans (Poetry recitals) on this day. Gudhi Padva is considered one of the foremost auspicious day in the year when people start new ventures.

It is believed that Lord Brahma, created the world on this day and so he is worshiped especially at this time. Lord Vishnu too is said to have incarnated as Matsya, the fish, on this day. A gudi (banner) with a swastika - marked metal pot and silk cloth is raised to announce victory and joy. In Maharashtra, it is reminiscent of the valiant Marathas returning home from their successful expeditions of war. Maharashtrians take the opportunity to honour their favourite leader, Chatrapati Shivaji Maharaj on the occasion.
Also Read: Ugadi Legends. 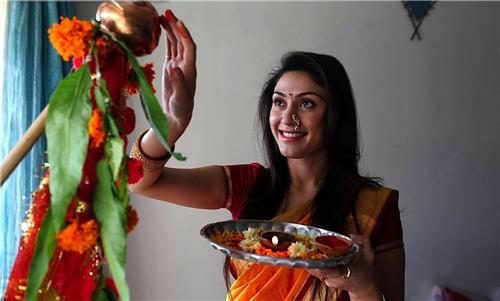 On the festival day, people decorate their houses with mango leaves and rangoli designs, and pray for a prosperous new year. They visit the temples to see the yearly calendar Panchangasravanam as priests make predictions for the upcoming year.


It is a tradition to serve bitter leaves of neem tree with jaggery as Prasad on Ugadi/Gudhi Padva. Gudi Padwa is considered as an auspicious occasion to make investments like buying a house, jewellery and other new things. The festival is celebrated when the summers begin and the time for harvesting the crop arrives. The fragrance of ripening mangoes, jackfruit and other seasonal fruits fill the air with sweet smell. 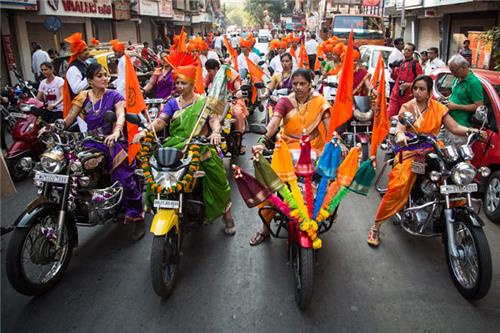 Indian society is largely dependent on agriculture and that is the reason that harvests are celebrated with much fun and frolic in the country.

Gudi Padwa on Chaitra Pratipada, first day of Chaitra Month, heralds a 9 day festival of Chaitra Navratri which will culminate on Ram Navami. On this day, we are also celebrating:
- Navreh Mubarak by Kashmiri Pandits
- Thapna (Staphana) by Rajasthani and Haryana as starting of New Vikram Samwant Year
- Gudi Padwa is celebrated in entire Maharashtra as the New Year
- Ugadi means the beginning of a new age by Andhraites/Telugu  from Andhra Pradesh & Telangana and Kannadigas from Karnataka
- Cheti Chand is celebrated by the Sindhis as it is birthday of Jhulelal.
- Treated as an auspicious day to buy house, gold and vehicles by Jagdish Purohit, IndiaPress & Adarsh Group, Mumbai