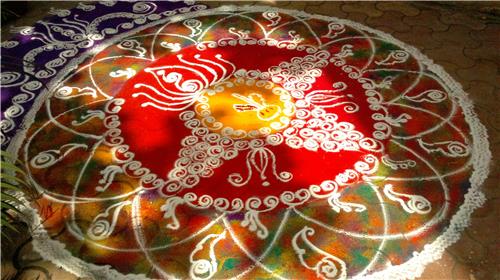 On the day of the festival day, people in villages rise early in the morning and take an oil bath. The courtyards of the houses in village are swept clean and are plastered with fresh cowdung on the festive day. Women and children draw intricate and beautiful patterns of rangoli designs by paste of rice grains, turmeric paste, vermilion powder, chalk and limewater on their doorsteps to welcome guests. The vibrant colours of Rangoli mirror the splash of colour of the season, spring. The strikingly colourful patterns brighten up the festive ambience. 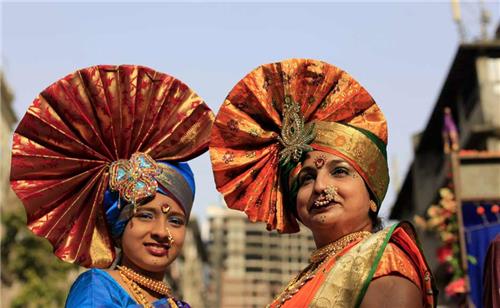 Everyone dresses up in new clothes especially bought up for the day and all family members gathers together to enjoy and rejoice the occasion. People offer oblations to God, and also prays for a prosperous new year.

The hoisting of the "Gudi" is the main ritual of the festival.

On the Gudi Padwa day Lord Brahma created the universe. After the Gudi is set up, everyone worships it and performs a prayer in honour of Lord Brahma. A gudi with coconut is hung from a rope atop which a person has to break the coconut by climbing the pyramid formed by the boys and young men of the locality.

What is a Gudi?

A gudi is a bamboo pole on top of which an upturned brass or silver pot called a kalash is placed. The gudi is covered with a bright green or yellow silk cloth adorned with brocade (zari) and decorated with coconuts, marigolds and mango leaves that symbolize rich harvest. An empty, inverted jug of water (tambya), made of brass, copper or silver and held up to the sky over it.

On Gudi Padwa, you will find gudis hanging out of windows or displayed in traditional Maharashtrian households as they are expected to ward off evil and invite prosperity and good luck into the house.

Some believe that the gudis are a symbol of victory associated with the conquests of the Maratha forces lead by Chhatrapati Shivaji Maharaj.

On the festival day, people erect gudis to the right side of the main entrance of their houses. 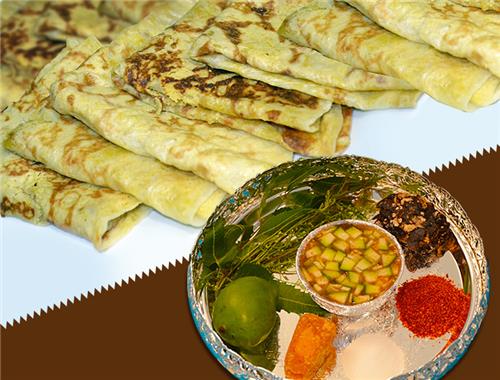 Special delicacies made on the day, like soonth panak and chana usal are eaten on this day. Traditionally, families are supposed to begin the festivities by eating the bittersweet leaves of the neem tree. Sometimes, a paste of neem leaves is prepared and mixed with ajwain, gul, tamarind and jaggery. All the members of the family consume this paste. It is believed that this neem paste will purify the blood and strengthen the body s immune system against diseases. 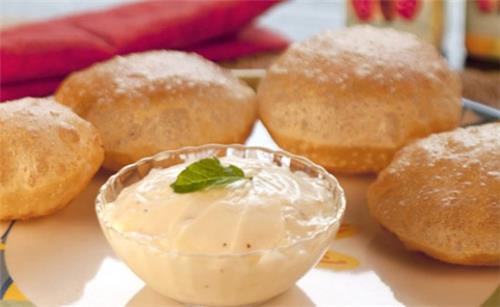 Feast involves traditional delicacies of shrikhand and Poori on this day. Other special dishes as Pooran poli, soonth panak and chana are also made. In Andhra Pradesh and Karnataka, a special kind of sauce known as Ugadi Pachchadi made up of neem, jaggery, raw mango and tamarind juice is prepared.

Gudi Padwa is considered to be an auspicious day to start new business and ventures. Gold ornaments are also bought on this day. Farmers plough their field and distribute food to laborers.