Guru Nanak was born into a Kshatriya family and was a son of an accountant. Even as a child, Nanak had a mystic disposition and had a contemplative mind.

He was of a pious nature and started meditation and spiritual practices very early in life. As a seven year old boy, he questioned his Hindi teacher about ‘knowledge’ and how will it help to attain freedom.

His father then tried to divert his mind to worldly affairs and asked him to cultivate land and tend the cattle. He also put him in charge of a shop but all his efforts failed as his only work was meditation and praying to God. Guru Nanak eventually married and had two sons but he left his family life and became an ascetic. 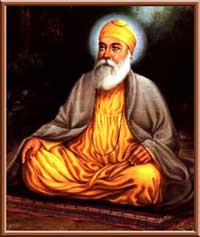 He was not only the founder of the Sikh religion, he was also a great poet, philosopher, humanist and a powerful social reformer, a teacher of mankind. Nanak said that one need not become a sanyasi sacrificing one s family, to please God. Those who practice devotion, whose mind is pure and who have sympathy, patience and honesty, are in no way inferior to a sanyasi. He considered that all human beings were highborn; no one was low.

He stressed, "Do not ask someone s caste; those whose devotion is accepted by God are good people. God appreciates those who have conquered the I and greed .
Add comment
JComments