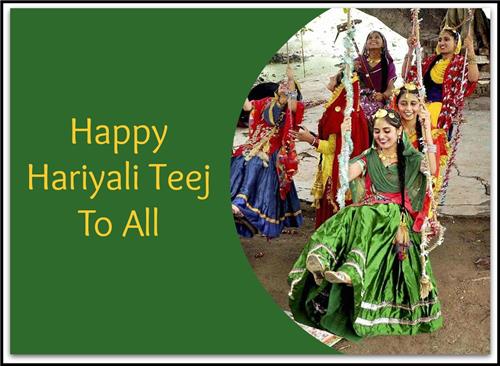 Lush green surroundings and lively ambiance of the gardens come alive as groups of young women sing songs and sway on the jhoolas (swings) specially created for festivities. The occasion is Teej or popularly known as Hariyali Teej. Teej in its literal sense means ‘third’ and usually falls on third day after Amavasaya. The Teej festivities during the month of Shravana are considered to be auspicious. The festivities fall during the rainy season therefore the Teej is also referred to as Hariyali Teej. 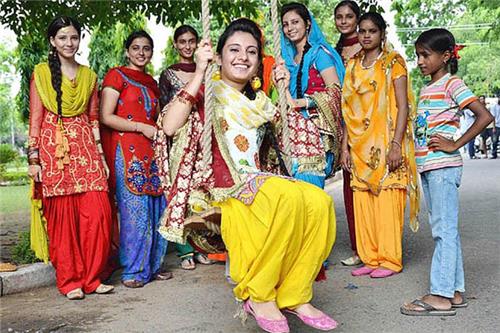 It is common for married women to visit their parent’s home on the occasion of Hariyali Teej. The ladies usually dress in green saris and wear new set of bangles. They sing Teej songs in groups as they swing in groups in gardens in vicinity of their homes.
In some parts of the country, the girl’s parents send special gifts to her in-laws home on this auspicious occasion. The gift box commonly known by the name of Sindhara contains sweets prepared at home, a Ghewar along with some heena and bangles for their daughter.  The festival is celebrated by girls and married women with much fanfare in Indian states of Uttar Pradesh, Madhya Pradesh, Rajasthan and Bihar.

In Hindu Mythology, it is generally believed that it was on this occasion of Hariyali Teej that Lord Shiva finally agreed to marry Goddess Parvati. As per prevailing myths, Goddess Parvati was in love with Lord Shiva and wanted him to be her soul mate.

However, being an ascetic, Lord Shiva did not realize of Parvati’s devotion for him. He lived in deep forests and meditated all the while. He was unaware of the developing scenario. Goddess Parvati realized the fact that it was not an easy task to woo Lord Shiva. So she embarked on the treacherous journey to the Himalayas. It was in the Himalayas that she finally decided to meditate in order to attract the attention of Lord Shiva.

Lord Shiva came to know about the selfless devotion of Goddess Parvati and decided to marry her. Thereafter, Goddess Parvati is known to be worshiped as ‘Hartalika’ and ‘Teej Mata’ by married women across the country, particularly in some states of Northern India.