Holi is one of the most popular festivals of Himachal Pradesh. The festival heralds the end of the winter gloom and ushers in the vernal season. Holi, in Himachal Pradesh is celebrated with much gusto. The atmosphere reflects the colorful mood as people throw gulal in the air, expressing great joy at the arrival of the festival. 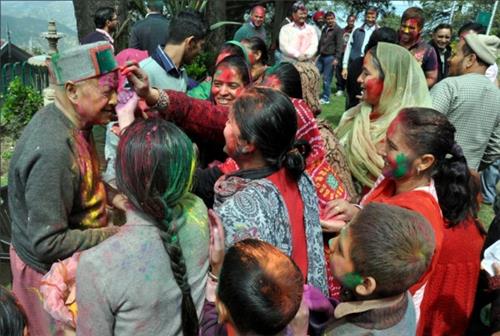 It is the time when people of every age can have fun. Days before Holi, the markets get flooded with the colors of every hue. Water guns or pichkaris of various designs can also be seen in the market. This sets the mood of the people for the actual day. The piles of red, yellow, magenta, pink, green and blue color on the streets forms a beautiful sight.

Traditions of Holi in Himachal Pradesh 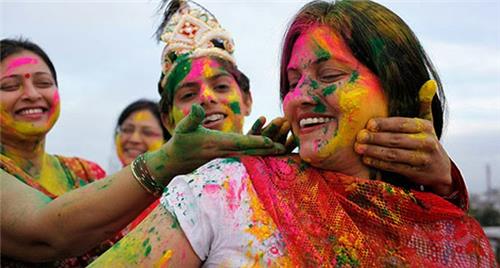 Himachali women (especially in villages) perform special pooja during Holi. Twigs of the Kamal tree are painted in red and yellow colors. These are laid out in bamboo baskets or khartoo along with roli, kumkum, jaggery, roasted grams. The womenfolk carry this basket and pots of colored water in their hands for the ritual. This is first offered to an elderly man or Dandochh and then the Holi is played. A day prior to Holi, when the moon comes out, a bonfire is built and set to fire (Holika). The younger men compete with each other in order to touch the Holi flag first, since it is considered as auspicious. Special Kadah Prasad (a traditional sweet ) is prepared and distributed.

Several fairs are organized at Sujanpur, Palampur, Baijnath, Ghughar, Paprola and Jaisinghpur. The fair at Sujanpur dates back to the time of Katoch dynasty. It was Raja Sansar Chand who patronized the artists and musicians during his rule. The fair has been declared as a state festival by the H.P government. The fair is held for four days and lots of traditional culture (in terms of cuisine and art) can be experienced during the mela (fair). Clay pots are also sold and the entire valley seems to echo the sounds of the folk songs. 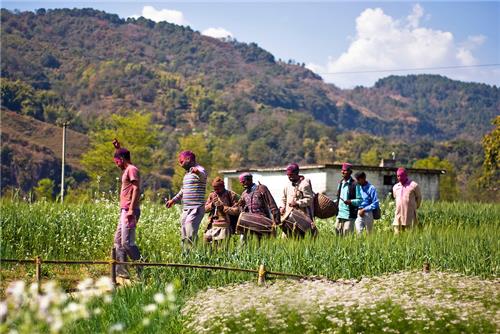 A temple dedicated to Chamunda Devi is located on a nearby hill, Tira. This place is thronged by a large number of devotees at this time of the year. Thousands of devotees also gather at the holy shrine of Ponta Sahib on the banks of Yamuna. Holi in Kullu is marked by mixing snow with colours. While, the main celebrations are held at the world famous Solang Pass, that witnesses the heaviest snowfall in the country.