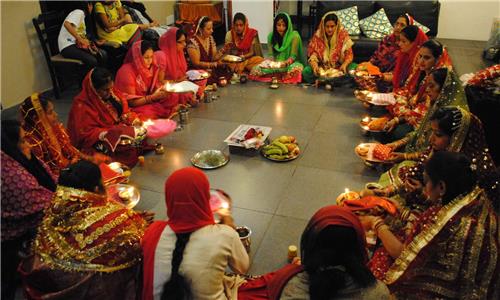 As soon as the mother-in-law left, the daughters-in-law cooked a Kadhai full of Halwa. They could not sight the moon as the sky was overcast, so they slept without eating the Halwa. The youngest daughter-in-law could not sleep because of hunger. In the meanwhile, a thief named Kundalo entered the house. The youngest daughter-in-law sighted the moon and forgetting the correct words of addressing the moon, started calling “Kundalo” and woke up her sisters-in-law. Listening to his name, the thief ran away leaving behind all the valuables tied in bundles. All the sisters-in-law did the Puja of the moon, had their Halwa and slept. 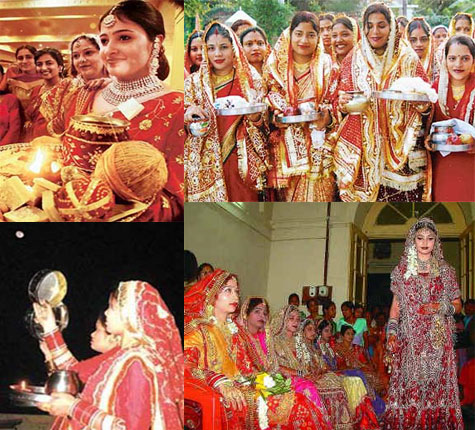 Early next morning when the mother-in-law returned she found the valuables of the house tied up in bundles in the door way. As it was getting a little bright the thief came back to get the loot. The Sahukaar asked him the reason for his coming. The thief said that the Sahukaar had a very wise daughter-in-law who knew his name. In the night when he was taking away the loot she shouted his name “Kundalo” and woke up her sisters-in-law. Out of fear, he had run away leaving the bundles behind.

The mother-in-law called her daughters-in-law. The youngest daughter-in-law narrated the whole story as to how all of them wanted to eat Halwa, how they bluffed to the mother-in-law and made her get out of the house, how she could not remember the name of the moon and had started- calling out Kundalo which made the thief run away. The Sahukaar told his wife to give the charge of the kitchen to the daughter-in-laws and keep herself busy doing Puia and charity.Chauth Mata, as you gave back the wealth to the Sahukaar and blessed his family so also bless the narrator of the Katha, the listeners of the Katha and the followers of the Katha along with their families.