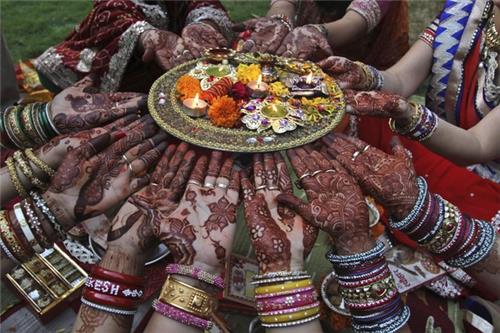 A rich Sahukaar had seven sons and a daughter. All the brothers, sisters-in-law and sister ate together. As the sister grew up the brothers got her married. After the wedding on the sister s first Karva Chauth, she came to her parents house to celebrate the festival with her brothers and sisters-in-law. On the day of the chauth fast when the brothers asked the sister to eat with them she said that she would eat only after the moon was sighted. The brothers could not see their sister hungry for such a long time. So one brother got a deepak, one got a sieve (channi).


They lit the deepak and asked the sister to look through the sieve. Since it looked like the moon, the sister did the puja and offered arag to the moon. She asked her sisters-in-law to also come and see the moon, but they refused saying, "Your moon has risen now ours will rise later". When the sister sat down to eat the first morsel it had a strand of hair in it. The second morsel had an insect in it and as she was about to eat the third morsel, a messenger arrived from her in-laws house saying that her husband was very unwell.

As she was about to leave for her in-laws house, her mother opened the trunk of clothes thrice to give a saree to her daughter to wear but every time she got only a white saree. Ultimately the daughter wore the white saree to leave for her in-laws house. Her mother gave her a gold coin and told her to give it to the person who blessed her with amar suhaag (long life for the husband) and tie a knot in her saree pallu. On the way the daughter met lots of people, touched their feet, but no one blessed her with Amar Suhaag. She reached her husband s house and was greeted by her younger sister-in-law who blessed her with amar suhaag.
She gave the sister-in-law the gold coin and tied a knot in her saree. Her mother-in-law informed her of her husband’s death and asks her to go her room and sit by the body of her husband. Everyday a servant would give her leftover food to eat. Days passed and then came Chauth of the month of Mairgshir. She requested the Chauth Mata for forgiveness and asked for the life of her husband. Chauth Mata told her that the Chauth Mata of the coming month Paush will fulfill her wishes. The girl in turn asks all the Chauth Matas of the months of Maagh, Falgun, Chaitra, Baisakh, Jyeshtha, Aashadh, Saavan, Bhadon and Aasoj. They all say the same thing that the next Chauth Mata will probably bless you.

Finally the girl is informed that Karthik Chauth Mata is angry with her and only she can give her suhaag back. When, on Karthik Chauth, the Chauth Mata comes, the girl pleads with her and does not let go of her feet. Mata relents. She takes out kajal from her eyes, mehendi from her nails, sindoor from her bindi and sprinkles them on her husband. The girl’s husband wakes up saying he has been asleep for a longtime. The girl tells him the whole story. Meanwhile, the servant who came to give her leftover food, sees the husband alive and informs the mother-in-law. The girl touches her mother-in-law’s feet and tells her that because of the blessings of Chauth Mata, she got her Suhaag back. She is very happy and tells every one about the miracle. Chauth Mata, as you blessed the girl with her suhaag, so also please bless the narrator of the katha, listeners of the katha, those who are following the katha along with their families.

Bindaayakji /Ganeshji ki Katha is read after one reads the festival katha. A few grains of rice are kept in the hand while listening to the katha, After completion of the katha, the rice grains are left in the water of the kalash, kept for puja.