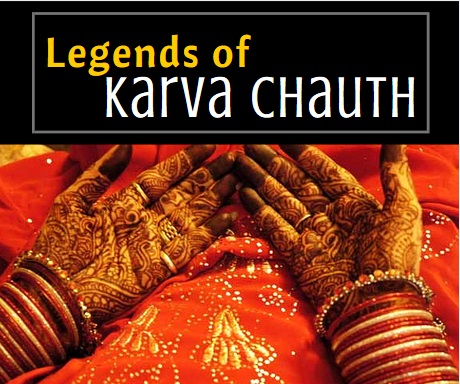 There are quite a few legends known about the special festival of Karva Chauth. Some of these legends and stories are listed below:

Long time ago, there lived a beautiful girl by the name of Veeravati. She was the only sister of her seven loving brothers, who was married to a king. On the occasion of the first Karva Chauth after her marriage, she went to her parents house. After sunrise, she observed a strict fast. However, the queen couldn t stand the rigors of fasting and was desperately waiting for the moon to rise. The seven brothers, who loved her dearly, were very disturbed watching the distress of their sister and decided to end her fast by deceiving her.

Then the brothers reflected a mirror through Pipal tree leaves. The sister, mistook it as a moon, broke the fast and took food. However, the moment the queen ate her dinner, she received the news that her husband, the king, was seriously ill. The queen rushed to her husband s palace and on the way, she met Lord Shiva and his consort, Goddess Parvati.Parvati informed her that the king had died because the queen had broken her fast by watching a false moon. However, when the queen asked her for forgiveness, the goddess granted her the boon that the king would be revived.

But to achieve this, she would have to undertake the Karva Chauth fast under strict rituals, and then only her husband would come to life. Thus, by strictly following all the rituals of Karva Chauth, Queen Veeravati was able to bring back her husband’s life.

The Legend of Mahabharata

The belief in this fast and its associated rituals goes back to the pre Mahabharata times. Draupadi, too, is said to have observed this fast.

Once Arjun went to the Niligiris for penance and the rest of the Pandavas faced many problems during his absence. Draupadi, out of desperation, remembered Lord Krishna and asked for help. Lord Krishna reminded her that on an earlier occasion, when Goddess Parvati had sought Lord Shiva’s guidance under similar circumstances, she was advised to observe the fast of Karva Chauth. Draupadi followed the instructions and observed the fast with all its rituals. Consequently, the Pandavas were able to overcome their problems.

The Story of Satyavan and Savitri

According to the story of Satyavan and Savitri, when Lord Yama, came to procure Satyavan s soul, Savitri begged him to grant him life. When he refused, she stopped eating and drinking and Yamraj finally relented. He fulfilled her wishes, and granted her husbands life.

The Legend of Karva

According to another legend, a woman named Karva was deeply devoted to her husband. One day while bathing, he was caught by a crocodile. Karva came running and bound the crocodile with a cotton yarn. She then went to Yama, the Lord of the death, and requested him to send the offending crocodile to hell. When Yama refused, she threatened to curse him. Afraid of the power of a devoted wife, Yama readily accepted and sent the crocodile to Yamalok or hell, and blessed Karva s husband with long life.