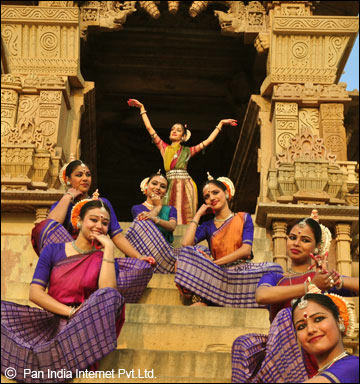 Khajuraho was the religious capital of Chandela dynasty, one of the most powerful Rajput dynasties of Central India and now it is famous for its enchanting temples and legendary Dance Festival. Every year, a week long festival for classical dances is held in February/March against the spectacular backdrop of the magnificently lit temples.

This cultural festival highlights the richness of various Indian classical dance styles such as Kathak, Bharathanatyam, Odissi, Kuchipudi, Manipuri and Kathakali. Also, there are performances from some of the best exponents in the field. Apart from the traditional classical dance forms, the modern Indian dance has also made it to the list.

Along with the renowned performers, a number of craftsmen display their crafts to the visitors. Also, there is an open market for local articles sale. Khajuraho Dance Festival is conducted in order to celebrate the cultural heritage of Khajuraho temples and to preserve them for the upcoming generation.

It is believed that classical dance is originated from the Hindu temples and attained its maturity. This cultural festival is celebrated to encourage the Indian arts- dance and music, which is driven from one generation to the other.

In 2020 Khajuraho Dance Festival will be organised between February 25 (Sunday) to March 03 (Saturday) in Khajuraho, Madhya Pradesh. There is a free entry to all the temples of eastern and southern parts, whereas minimal fee is charged for the temples located in the western part.