Haridwar is regarded as one of the seven holiest places to Hindus and is an important pilgrimage city and municipality in the Haridwar district of Uttarakhand. It is also known as the Gateway to the Gods. Today, the city is developing beyond its religious importance, with the fast developing industrial estate of State Industrial Development Corporation of Uttarakhand (SIDCUL),  and the close by township of Bharat Heavy Electricals Limited in Ranipur, Uttarakhand as well as its affiliated ancillaries.

Haridwar also stands as a gateway to three other important pilgrimage destinations: Rishikesh, Badrinath, and Kedarnath. The city along with Ujjain, Nasik and Allahabad is one of four sites where drops of Amrit, the elixir of immortality, accidentally spilled over from the pitcher while being carried by the celestial bird Garuda. This is manifested in the Kumbha Mela being celebrated every 12 years in Haridwar. 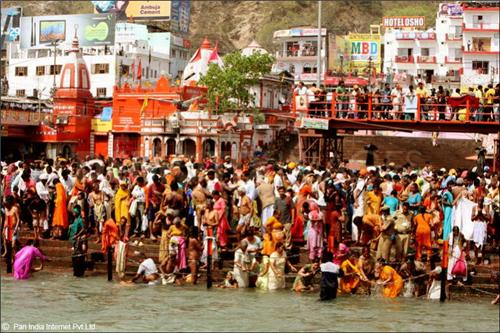 Amidst the Kumbha Mela, millions of pilgrims, devotees, and tourists congregate in Haridwar to perform ritualistic bathing on the banks of the river Ganges to wash away their sins to attain Moksha. It is one of the largest religious fair in any religion across the world where a high number of people gather at many places and perform the various rituals on this special day by the banks of all others rivers too.

The Kumbh Mela at Haridwar comes at the top of the list of all Indian pilgrimages, so the Kumbh Mela in this place accounts exceptional coverage by media and Tourist traffic. The place is named as a gateway for heaven in the mythological scriptures of Hindu religion.

The procedure of calculating the Kumbhmela requires knowing the position of the sun, the Jupiter and the moon and how this is falling in the same line with the Zodiac to each Mela falls in. Last kumbhmela in Haridwar was celebrated on the occasion of the Makkar Sankranti, which started on the 14th of January 2010 and ended on 28th April 2010. The next Maha Kumbh Mela in Haridwar will be held in 2022 and the Ardh Kumbh, celebrated after six years of Maha Kumbh will be observed in 2016.

How to reach Haridwar

Haridwar lies on the banks of the Holy Ganges and serves as the gateway to the four pilgrimages of Uttaranchal. The city is well connected with all the available modes of transport, which helps the devotees visit to this holy pilgrimage.

By Air
The nearest airport is Jolly Grant Airport of Dehradun, which is located approximately 45 kms away. From there, one can easily catch a bus or hire a tax to reach the holy city.

By Rail /Train
The city has a railway station of its own, which connects it will all the key cities of India, like Delhi, Mumbai, and even Kolkata.

By Road
Reaching Haridwar by road is again an enjoyable option. The city is connected, via NH 58, with the capital city of India - New Delhi. Apart from that, it also shares a good road network will the other major cities of the country.