Ujjain is an ancient city of Malwa region in central India, on the eastern bank of the Kshipra River and is today a part of the state of Madhya Pradesh. It is regarded as one of the seven sacred cities (Sapta Puri) of the Hindus and is one of the four sites along with Prayag (Allahabad), Haridwar and Nasik that host the Kumbh Mela, and attracts a millions of Hindu pilgrims from around the country. It is also the place where Lord Krishna, along with Balarama and Sudama, received his education from Maharshi Sandipani.


Ujjain is enriched with several religious shrines such as Bade Ganeshji Ka Mandir, Mahakaleshwar, Vikram Kirti Temple and many others. The indomitable spirit of Ujjain is best exemplified by the legend of an ancient banyan tree named Siddhwat. The tree is believed to possess extraordinary spiritual vibrations and holy men meditate under it while others worship it. 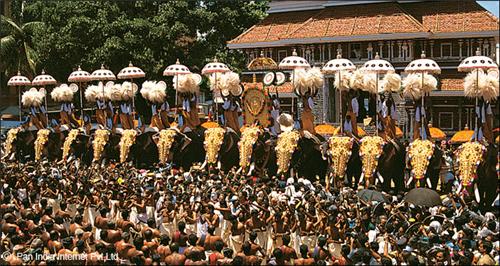 There is also an interesting tale behind the sanctity of the city. Its origin is ascribed to the mythological legend of Sagar Manthan. The story goes that after the nectar was discovered; there was a chase between the gods and the demons to have the nectar first so as to attain immortality. During this chase a drop of nectar spilled and fell on Allahabad, Haridwar, Ujjain and Nasik, and this again manifested in the Kumbh Mela being celebrated in Ujjain in every 12 years, thus making the city a sacred place.


Apart from the mythological legends, the city has a long and distinguished history that it has witnessed legendary rulers including the renowned king Chandragupta II, great scholars such as Brahmagupta and Bhaskaracharya, and literary gems like Kalidasa.

On the occasion of Kumbh Mela the divinity and spiritual aroma of Ujjain meets its extreme peak when the millions of devotees take dips and worship sacred River Shipra. Sages and devotees from every nook and corner attend the religious ceremony of Kumbh Mela to attain salvation and libration from the vicious cycle of birth-death-rebirth.

The commemoration of Mela at Ujjain is known as ‘Simhastha Kumbh Mela’,  and the major attraction of this festival is ‘Shahi Snan’ (royal bath) which takes place on predetermined dates varying every year. It is believed that those who get a royal bath in holy Shipra River on the occasion of Kumbh Mela can wash their sins of all previous births. The devotees consider it as an opportunity to get them revived from the never ending birth cycle.

‘Simhastha Kumbh Mela’ in Ujjain is the unique combination of divinity and purity, which is experienced when the crowd of ash-dubbed sages, priests, devotees gets fused together with the roaring of elephants and camels. People who witness the spiritual fest feel good fortune by their side and sense positive aroma purifying their souls and thoughts.

Ujjain hosted the Ardha Kumbh in the year 2010 where numerous Hindus witnessed the occasion. The next ‘Simhastha Kumbh Mela’ will be celebrated in Ujjain in the year 2016.

How to reach Ujjain