Lal Bahadur Shastri Jayanti is celebrated on October 2 every year. His birthday coincides with that of Mahatma Gandhi. Most people know only about Gandhi Jayanti on this day. However, it is fit to mention that both the two great heroes born on this day dedicated their lives to the larger cause of the nation. The year 2020 will celebrate the 113th birth anniversary of the national heroes.

It is a nationwide celebration held at all important Government offices, Schools, Colleges, Institutions and NGOs.

Celebrations are held all over the country commemorating the two patriots for their struggle in the Indian Freedom Movement. This day is also celebrated as Peace Day in some places.

Since the occasion marks the birth of two national heroes, all functions usually have the same agenda to mark the day. The pictures and statues of Lal Bahadur Shastri and Mahatma Gandhi are garlanded with flowers. Important government, civil services personnel and police officials like the Commissioner of Police are present at the ceremony.


In one speech to mark his birth anniversary, a Commissioner stated, ‘Humane, tolerant with tremendous inner strength and resoluteness, he was a man of the people who understood their language. He was a visionary who believed in the cause of the country before all else and strove for the nation’s progress all his life.’

In this age of power hungry politicians, Lal Bahadur Shastri was the first person to step down from the position of Minister of Railways because he felt personally responsible for a rail accident. This unprecedented gesture was greatly appreciated and respected by the Parliament and the country. Even today, in many speeches, this example is used to demonstrate the simplicity of gesture and the strength of character.

Last year in Devangere, Karnataka, Mr. Shamanur Shivashankarappa, Minister for Horticulture and Davangere district in-charge Minister, while addressing a congregation in the honor of Shastri said, "Lal Bahadur Shastri was a great leader who stood the test of time with integrity, conviction and clarity."

Lal Bahadur Shastri Jayanti is celebrated with a lot of gusto by farmers because of the deep involvement of the great leader in all affairs concerning their life and development in agriculture.

In order to be a part of the celebration, people flock to Vijay Ghat, southeast of Red Fort in New Delhi which is a perfect spot to spend the day in the memory of the great leader. It is in Vijay Ghat that the former Prime Minister of India had been cremated. Prayer Services are offered by political leaders as well as common people every year here at Vijay Ghat.

Celebrations in Schools, Colleges and Institutions

In many schools, there are books distributed which narrate the life and times of the great fighter, his ideals and vision. Such inspirational stories are aimed at establishing a sense of national and political consciousness amongst the children and youth.

On this occasion, many students from different colleges get together and deliberate on topics like ‘peace and non violence’, ‘honesty in politics’ etc drawing inspiration from the teachings and preaching of the two great political leaders.

Celebrations take place in all major schools and institutions where students dress up as farmers and soldiers sing patriotic songs to pay homage to Lal Bahadur Shastri. His contribution towards making India a free and progressive nation are recalled and acknowledged. His key role in singing the Peace Pact in 1965 with Pakistan so as to bring an end to the Indo-Pak war is recalled with great reverence.

Community events are organized by Red Cross Society or Lion’s Club of India and various NGOs dealing in agricultural and farmers-related issued. Patriotic songs are sung and there is a felicitation to the brave hearts who are presently fighting for the cause of the country.

Many school and NGOs organize programs revolving around the cause of the farmers on this day. An NGO in Kanpur, last year started a programme to educate women belonging to the househols of farmers in a nearby village. Many similar initiatives are taken by schools and institutions who believe in the vision of Lal Bahadur Shastri. Since he regarded agriculture to be the backbone of the country, various agricultural and rural development schemes are initiated in his honor.

Lal Bahadur Sharstri was born on October 2, 1904. He served during the Freedom Struggle since 1920 and also became the second Prime Minister of the country after independence. He is the man behind the revolution of the agricultural sector in India.

He is known to uphold the ideas of self respect and ethics of every living man. A staunch follower of Gandhi and Nehru, his famous slogan ‘Jai Jawaan Jai Kissan’ (Hail the soldier, hail the farmer) is popular even today. He took the seat of the Prime Minister when India was in critical condition after the death of Jawaharlal Nehru. 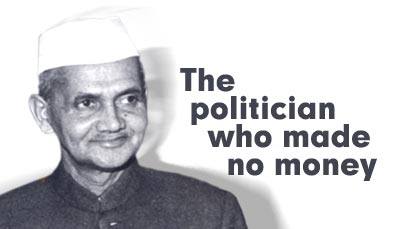 Amul Milk Cooperative’s White Revolution, whose main aim was to promote and supply milk in the country, took place under the aegis of Lal Bahadur Shastri. When there was a food shortage in the country Shastri urged the people to give up one meal a day so that the food saved could be distributed to those utterly deprived in the country. Shastri was also a part of the Salt Revolution which was headed by Mahatma Gandhi.

He is also known for his notable contribution in the 22 day Indo Pak war of 1965 where he led the nation to victory with his unique forthrightness and bravery. It was under his leadership that the Indian Armed Forces penetrated the outskirts of the Lahore City.  He motivated the soldiers with the slogan of Jai Jawaan Jai Kissan to and simultaneously cheered the farmers to do their best to increase the production of food grains so as to reduce dependence on imports.

"The Preservation of Freedom is not the task of the soldiers alone. The whole nation has to be strong."

"There comes a time in the life of every nation when it stands at the cross-roads of history and must choose which way to go. But for us there need be no difficulty or hesitation, no looking to right or left. Our way is straight and clear - the building up of a socialist democracy at home with freedom and prosperity for all, and the maintenance of world peace and friendship with all nations."

He is known as a ‘simple man with an exemplary lifestyle.’ He died on January 11, 1966. He was posthumously conferred with the Bharat Ratna Award. Much is said about Gandhi and his ideals. Let us not forget that Lal Bahadur Shastri also deserves the same amount of veneration and commemoration as a National Hero.