Makar Sankranti is a harvest festival celebrated by Hindus throughout India. It marks the transition of the sun from the Tropic of Cancer to the Tropic of Capricorn (Makar in Sanskrit), thereby returning to the northern hemisphere. Dedicated to the purification of one s soul, and the beginning of a new phase of life, this festival is commemorated in different ways by different communities.

In Assam, Makar Sankranti assumes the name of Magh Bihu or Bhogali Bihu. It is one of the biggest festivals of the Hindu population in Assam. Celebrations start on the night before the festival. Known as Uruka, it is a night of feasting, praying, exchanging of sweets, and building of huts with thatch, dry leaves and bamboos. These makeshift huts are called Mejis. People gather round the Mejis and sing devotional songs to the accompaniment of dhols.

The next morning starts with an early bath for purifying themselves, and then the Mejis are burned as part of the ritual. Rice cakes or pithas and betel nuts are thrown into the burning huts as offerings to the gods to get blessings for the new harvesting year. Burnt remains are then taken to throw among fruit trees so that they bear abundant products. The rest of the day is spent watching or participating in cock-fights, buffalo fights and other such diversions.

The Assamese communities in Meghalaya and Mizoram also celebrate the festival with the same amount of devotion and enthusiasm.

Arunachal Pradesh holds a special place in the hearts of Hindus when it comes to Makar Sankranti. It is recorded in as many as three ancient Hindu texts – Kalika Puranas, Srimat Bhagwata and the Mahabharata, that the sage Parsurama immersed himself in the waters of the Lohit Lake, a district located in Arunachal Pradesh, to cleanse himself of his sins. This lake, now called Parasuram Kund, thus has religious significance for Hindus, who come in large numbers every year from all over the country to take a dip in its holy waters. A shopping fair is also held in the nearby district of Tezu, adding to the colorful nature of the festival.

Like Arunachal Pradesh, Tripura attracts a large volume of Hindu pilgrimage during this festival, which sometimes referred to as Poush Sankranti. In the district of South Tirthamukh, two rivers, Raima and Sarma, merge to form the Gomati River. It is to the banks of this river that the pilgrims come, to wash away their sins on the auspicious day of Makar Sankranti and to pray to Surya Dev, the Sun-God of Hindu pantheon. They may also perform Shradha, Tarpan and Pinda Daan rituals for their dead forefathers. After the prayers are over, the visitors and local population visit Tirthamukh Mela, where various items are sold. 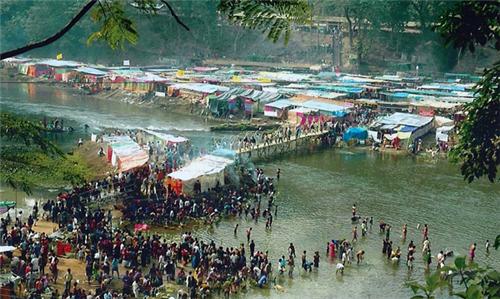 In Manipur, the Hindus of the Meitei community mark the ascendancy of the sun with a puja at home. Many offer baked sesame cakes called kangsubi to deities – some pray to Lainingthou, the supreme god residing in the house, and others conduct the puja in front of the tulsibong (basil plant temple) in the courtyard. These sesame cakes are then consumed to purify the soul. A lot of people also visit the mandirs maintained by their local Brahmins, or may go to Shri Govindajee Temple in Imphal to participate in the worshiping ceremony. 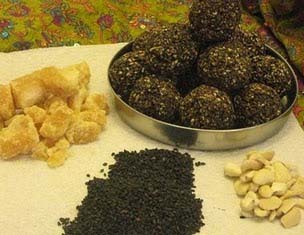 Makar Sankranti is not celebrated in the state of Nagaland.
Add comment
JComments