Muharram commemorates the martyrdom of the prophet Mohammed s grandson- Hazrat Imam Hussein. It is observed all over the world by the Muslims especially the Shia community. Tazias, glittering replicas of the Martyr s tomb, are carried in procession through the streets. The Tazias of Lucknow and Hyderabad are noted for their splendour. In places like Lucknow, Delhi, Agra and Jaipur, grand scale processions are held. People beat their chest in mourning to the tune of beating drums and chant Ya Hussain . Devotees beat themselves and inflict wounds on their own bodies.

The mourning starts from the 1st day of Muharram and lasts for 10 days until 10th of Muharram. Muharram is the first month of Islamic calendar. During this month, while on a journey, Hazrat Imam Hussain, his family members and a number of his followers were surrounded by the forces of Yazid, the Muslim ruler of the time. During the siege, they were deprived of food and water and many of them were put to death. The incident happened at a place called Karbala in Iraq in 61st year after Hijra. This dispute was a result of a disagreement among Muslims on the question of succession after the demise of Hazrat Ali, the fourth caliph. Some sects of Muslims hold meetings where speeches are made on the happenings of Karbala and on the lives of martyrs.

The Shias, however, observe this festival in a different fashion. As Muharram, the first month of the Muslim year, approaches, they put on black clothes, as black is regarded as a colour of mourning. Majalis (assemblies) are held every day during the first nine days where Shia orators relate the incident of the martyrdom of Hazrat Imam Hussain and his party in a great detail. On the 10th day of Muharram, large processions are formed and the devoted followers parade the streets holding banners and carrying models of the mausoleum of Hazrat Imam Hussain and his people, who fell at Karbala. 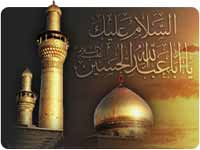 They show their grief and sorrow by inflicting wounds on their own bodies with sharp metal tied to chain with which they scourge themselves. This is done in order to depict the sufferings of the martyrs. It is a sad occasion and everyone in the procession chants "Ya Hussain", with loud wails of lamentation. Generally a white horse beautifully decorated for the occasion, is also included in the procession, to mark the empty mount of Hazrat Imam Husain after his martyrdom. During these first ten days of Muharram, drinking posts are also set up temporarily by the Shia community where water and juices are served to all, free of charge.