Communication plays very important role in the lives of every living being. It is possible to share the thoughts, ideas and information with each other only through some means of communication. Communication process has been prevailing since pre-historic times. Not only humans but also plants and animals communicate in their own language. Narad Muni is believed to be a pioneer of communication. 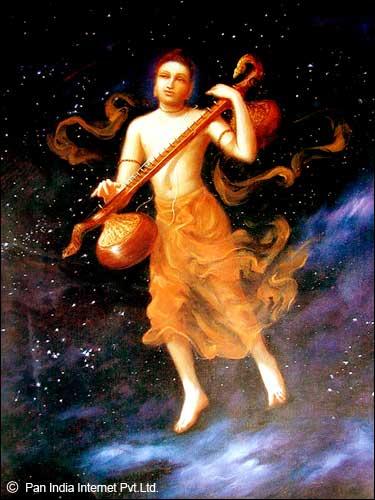 Some Puranas suggests that Sage Narad appeared from the forehead of Lord Brahma whereas some like Vishnu Purana advocated he is the son of Sage Kashyapa. Narad rishi is one of the prajapatis and also among the seven honourable rishis. Narad Jayanti is observed as the birth anniversary of Devrishi Narad. It is said that he used to continuously travel all through the world singing and communicating information. Rig Veda has some hymns accredited to Narada Muni. Naradji is imagined as a sanyasi with a Veena in hand who often create trouble of course with a positive intention or for the betterment of the universe.

Narad Jayanti is commemorated on the day after full moon day in Vaishakh month i.e. April or May.

Sage Narad is a precursor of modern day journalist and mass communicator. So the day is also called ‘Patrakar Diwas’ and is celebrated in this form across the country. He is believed to be the inventor of the musical instrument, Veena. He has been held the chief of the Gandharvas who were the divine musicians.

Intellectual meetings, seminars and prayers are held on the occasion in North India.

The day appeals the journalists to follow his ideals, broaden their approach to people of the society and aim towards public welfare.