Alappuzha is famous for its annual boat race, held on the second Saturday of August every year. The long elegant snake boats, with crews of over hundred men vying to win the coveted trophy, attract spectators from all over. This was started in 1952 when India s first Prime Minister, Mr. Jawaharlal Nehru, visited Alappuzha, and inaugurated the function in which the gigantic snake boats with over 100 rowers in each raced one another. It is called a Snake Boat Race as its 135 feet length has since been overtaken by Vellankulangara snake boat, which is 140 feet long. 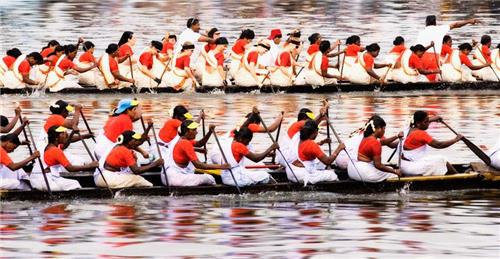 In the year 1952, Pandit Jawaharlal Nehru visited the erstwhile Travancore-Cochin. On his way to Alappuzha district from Kottayam he was given a roaring reception by the people of Alappuzha, escorted by the huge snake-boats. Having gone through the tremendous excitement of sailing in a snake boat popularly known as Chundan he donated a rolling trophy to be awarded to the winner of the Snake Boat Races to be held every year. The trophy is a replica of a snake boat in silver, placed on wooden abacus on which the following words of Pandit Jawaharlal Nehru the first prime minister of India are inscribed above his signature.

"To the winner of the boat-race, which is a unique feature of community life in Travancore-Cochin" - This was later christened, Nehru Trophy . From then onwards, year after year, the boat race has grown into Alappuzha`s most important event.

The Rajas of Yore

The story of these battling boats goes back 400 years in history when the rajas of the erstwhile principalities of Chempakasseri (Ambalappuzha), Kayamkulam, Thekkumkoor (Changanacherry) and Vadakkumkoor (Kottayam) in the old Travancore area, which were part of the present Alappuzha district and Kottayam district, frequently, crossed swords on the backwaters of Kuttanad. The Chempakasserry troops suffered heavy casualties at the hands of the superior navy their rivals commanded. It soon dawned on the Chempakasserry Raja that the real defect was with his war boats, which were sluggish and cumbersome.

He called all the boat architects in the land to his court and told them of his desire to have better and faster boats for the troops. After days of hard labour, a man who was reputed to be the best boat architect in Chempakasserry, Koduppunna Venkitanarayanan Asari, came up with a specimen which satisfied the raja’s requirements. It had speed, manoeuvrability and capacity to carry 100 able-bodied warriors on board and its eel-like construction was most ideal for launching an ambush since it could be easily kept concealed behind the overhanging bushes on the river banks. The Asari was generously rewarded and in the subsequent battles, the Chempakasseri Raja emerged victorious. 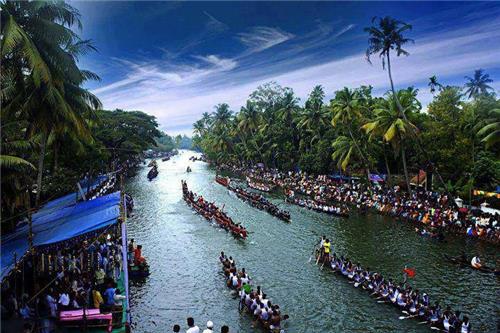 The story goes on to tell how the defeated Kayamkulam Raja sent a spy to Chempakasserri to learn the secret of the new war boat. The spy, a handsome youth, succeeded in seducing Asari’s daughter. The girl’s mother was overjoyed by the prospect of getting him as her daughter’s bridegroom and persuaded her husband to teach him the construction of the boat.

Needless to say, the deceitful youth disappeared the moment he thought that he had learnt the secret. Asari was imprisoned by Chempakasserri Raja for treason. But he was released and showered with many honours when the snake boats built by the Kayamkulam Raja proved to be no match for the war boats of Chempakasserry in the next battle. The subtleties of the snake boat’s design are hard to pickup and even today it requires years of apprenticeship under a master boat architect before one could independently undertake the construction of this ancient boat.

When a village decides to have a new snake boat, a committee is formed to raise the Rs.6 lakhs; it requires now to build the boat. The boat architect is summoned and the search for the “anjili” (which is the common name or the familiar name for this) tree of the required size often takes the villagers to the high ranges of Kerala. As the snake boat takes shape out of the huge trunk, the ‘asari’ relies mainly on his instinctive estimates. Of late, the boat builders’ prime concern is to make the snake boat as long as possible so as to seat more and more rowers for speed. The Nedumbhagom snake boat recently entered the Guinness Book of Records as the longest rowing boat in the world. 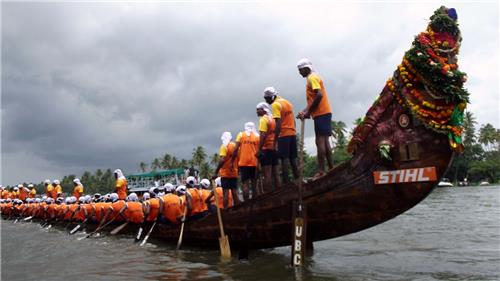 The celebrations that mark this annual event include music and folk dance performances and of course the boat race. The Nehru Trophy boat race is organized every year on the second Saturday in the month of August. The drum beats and boat songs called vanchipattu that complement these boat races almost work the spectators and the oarsmen into a frenzy of activity and adds a sense of thrill to the entire boat race.

So come and visit Alappuzha with the site Kerala Backwaters during the time when the Nehru Trophy boat race takes place. This adventure filled water sport is definitely worth a visit during your Kerala backwaters tour to Kerala, India. Today the Boat Race has grown into Alappuzha s single most important tourist event with boats being sponsored by different villages. Competition is severe as the boats with over 100 rowers in each, race to finish to the accompaniment of rousing music. 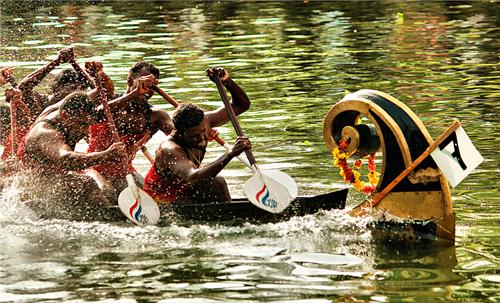 The title Nehru Trophy Boat Race was assigned after Pt. JawaharLal Nehru. The Trophy named as Nehru Trophy earned its title from Panditji as it was donated by the late Prime Minister of India, to the winners of the first race which was an impromptu one conducted in Punnamada Lake in honour of Panditji who visited Alappuzha district in Kerala State in 1952. The trophy is a replica of a snake-boat in silver, placed on wooden abacus on which the following words of Panditji are inscribed above his signature.

This Snake Boat Race is an aquatic festival that fosters a sense of unity and fraternity and sports man spirit event and attaching foreign tourists also. The Myth goes that on Panditji’s way to Alleppey from Kottayam the people of Alleppey, escorted by the huge snake-boats, gave him a roaring reception. Having gone through the tremendous excitement of sailing in a snake-boat popularly known as Chundan, Jawaharlal Nehru donated a rolling trophy to be awarded to the winner.