New Year’s Celebration was first observed in ancient Babylon about 4000 years ago. In the years around 2000 BC, the Babylonian New Year began with the first New Moon (actually the first visible crescent) after the Vernal Equinox (first day of spring). 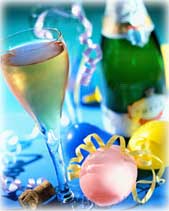 The beginning of spring is a logical time to start a new year. After all, it is the season of rebirth, of planting new crops, and of blossoming. The Babylonian New Year celebrations lasted for eleven days. Each day had its own particular grand mode of celebration.

The Romans continued to observe the New Year in late March. In order to set the calendar right, the Roman senate, in 153 B.C, declared January 1 to be the beginning of the New Year.

But tampering continued until Julius Caesar, in 46 B.C, established the Julian calendar. It again established January 1st as the New Year. But in order to synchronize the calendar with sun, Caesar had to let the previous year drag on for 445 days.

Although in the first centuries of A.D the Romans continued celebrating the New Year, the early Catholic Church condemned festivities as paganism. But as Christianity became more widespread the early Church began having its own religious observances concurrently with many of the pagan celebrations, and New Years Day was no different. New Year s Day is still observed as the Feast of Christ s Circumcision by some denomination.


During the middle ages, the Church remained opposed to celebrating New Year. January 1st has been celebrated as a holiday by Western-nations for only about the past 400 years. Catholic countries adopted it soon. Germany adopted it in 1700, Great Britain in 1752, and Sweden in 1753.

The Oriental countries through the influence of religious groups such as the Hindus, Taoists, Buddhists and Muslims, considered the new Calendar as the Christian Calendar, but also adopted it as their official one. Japan welcomed it in 1873 and China in 1912.