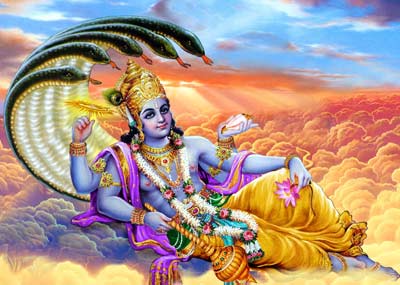 The word Papamochani is made with two words Paap and Mochani. Paap means sin or misdeed and word “Mochani” means remover. Devotees believe that observing fast on Papamochani Ekadasi is highly auspicious. Those who observe this fast would be forgiven from their sins. Lord Vishnu is mainly worshipped on Ekadashi Fasts.

The method of observing Papmochani Ekadashi fast is same as other Ekadashi fasts and it is clearly described in Harivasara .

The proper method and strictness of Ekadasi fast is difficult to follow in modern times. Devotees observe a full day fast on Ekadashi day. They pray to Lord Vishnu, chant mantras and Krishna songs. In various temples special gatherings are organized where lectures are held on Bhagwat Gita. It is believed that chanting and fasting together forms a protection layer around devotee s body. Ekadashi Parana (Parana means ending the Fast) is done next day on Dwadashi morning.

This tale is narrated in the Bhavishya Uttara Purana in the form of dialogues between Lord Krishna and king Yudhishtira.

There was a sage named Medhavi who was a great devotee of Lord Shiva. This sage used to perform deep Tapas (meditation) in the forest of Chaitraratha. This forest was full of beautiful and scented flowers. The Chaitraratha forest was also frequently visited by Indra and Apsaras. Beautiful Apsaras tried many times but could never succeed in seducing young Medhavi. One famous Apsara, "Manjughosa", also tried many ways to seduce this sage but she could not come closer to him due to the power of his sobriety that he had attained over the years.

After many attempts Manjughosa decided to pitch a tent couple of miles away from the sage and started singing. She sang so beautifully that even the Kamdev (Cupid) got excited and decided to use Manjughosha to target Medhavi. But when Manjughosha looked at powerful and attractive body of the sage, she herself got restless by lust .She again started singing seductively, Kamdev drew Medhavi’s attention towards the charm of Manughosha through his powerful magical bows .She slowly reached closer to Medhavi and embraced him with her beautiful arms. Medhavi stopped his tapa (meditation) and got trapped in Manjughosha’s charm.

He lost his purity of mind instantaneously. He got so much attracted to her charm that he even forgot the difference between night and day.

Medhavi was charmed by her for a very long time. After living a married life for 57 years, Manjughosha lost her interest in the sage, and decided to abandon him .Tricked by apsara’s charm Medhavi couldn’t be aware of the time he spent with Manjughosha. When Manjughosha asked Medhavi to permit her to leave, now the sage got his lost senses back and realized how he was tricked by this Apsara.

Fuming with anger Medhavi cursed her to become an ugly witch.Very sad Medhavi returned back to his father Sage Chyavana’s ashram and told the whole story to his father.

Sage Chyavana asked Medhavi to observe fast on Papamochani Ekadashi, and assured him that all his sins will be removed by observing fast on this Ekadashi. Medhavi observed the fast with full devotion to Lord Vishnu and got relieved from his mistakes. Chyavana advised the same fast to Majughosha as well. Manjughosha also observed the fast and regretted for her wrong deeds and she was also relieved from her sin.