Pushkar is known all over the world for its sacred lake. Devotees from all over the world visit Pushkar to take a plunge in the sacred water. The fest is full of colours and people throng to make the most of it. Pushkar fair is held once in a year during the Hindu month of Kartik. It begins on the Kartik Shukla Ekadashi (11th Day) and continues till the full moon day (Kartik Purnima). 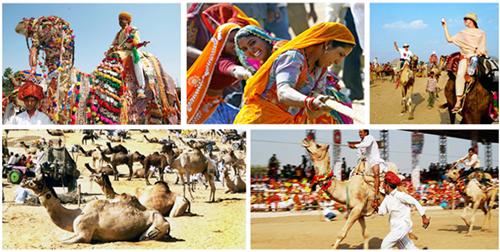 The sacred city of Pushkar is 14 km from the historic city of Ajmer in Rajasthan. Pushkar also houses the sole temple of Lord Brahma in India, hence it is considered as "fifth Dham" by Hindus. Hindu mythology says that unless Pushkar s Brahma shrine is visited, piligrimage is not completed. So, Hindus visit Pushkar after completing all the four Dhams to obtain salvation.

The fair attracts many tourists from all over the world. It is an exemplary socio-economic fair where the religious faith and commercial interest of the human society co-exist. It embodies the true festive spirit of India. Villagers from all over the state gather together and enjoy a welcome break from their harsh life of the dry desert. They dress in their best multi-hued attire and exotic jewelry. The fair has a vibrant display of rural India with colourful market selling silver artifacts, jewelry, local crafts and art.

The fair has two components viz camel trading and religious rituals. Camel trading, the main attraction for tourists, happens during the initial five days and subsequently it concludes when religious devotees begin to take holy bath at the famous Pushkar Lake. It is believed that by taking dip in the holy Pushkar Lake on Kartik Poornima the sins of the lifetime are washed away.

The history of Pushkar Fair states that on the full moon day of Kartik month all the 330 million Hindu deities visit and bless the devotees. Legend goes that once Lord Brahma wanted to perform “Maha-Yagna” and was searching for a peaceful place. He released a swan with a lotus in its beak and let it fall on earth. Pushkar is the place where the lotus fell and which later resulted into the formation of lake. Pushkar thus derived its name in Sanskrit which means blue lotus flower. It may also be derived from the word Pushpa meaning flower and Kar meaning hand. Another belief is that Brahma intoned lotus flower to kill a demon, Vajiranash. During the process the petals of lotus flower fell on three different places in and near Pushkar. Later Lord Brahma performed a yagna to protect these places from demons.

To offer aahuti, Brahma and his wife Saraswati were needed but since she was not there, Brahma married local Gujjar community girl Gayatri to accomplish the Ahuti. Upon this Goddess Saraswati got very angry and cursed Lord Brahma that he would not be worshipped anywhere on the earth except this place. From that day onwards there are no other temples of Lord Brahma and only Gujjar community prays him.