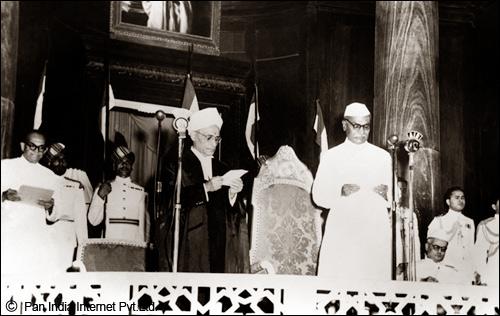 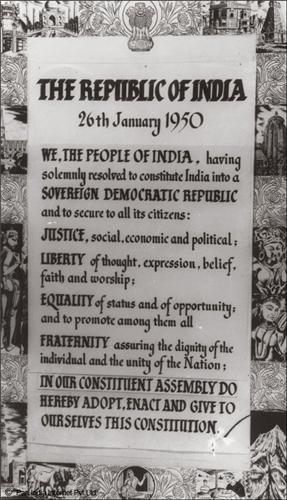 "It is a great day for our country. India has had a long and chequered history; parts of it were cloudy and parts bright and sunlit. At no period, even during the most glorious eras of which we have record, was this whole country brought under one Constitution and one rule. We have mention of many Republics in our books and our historians have been able to make out a more or less connected and co-ordinated piece out of the incidents and the places which are mentioned in these records. But these Republics were small and tiny and their shape and size was perhaps the same as that of the Greek Republics of that period.

We have mention of Kings and Princes, some of whom are described as Chakravarty , that is, a monarch whose suzerainty was acknowledged by other Princes. During the British period, while acknowledging the suzerainty of Britain, the Indian Princes continued to carry on the administration of their territories in their own way. It is for the first time today that we have inaugurated a Constitution which extends to the whole of this country and we see the birth of a federal republic having States which have no sovereignty of their own and which are really members and parts of one federation and one administration.

His Excellency the Ambassador of the Netherlands has been pleased to refer to the relations and connections of this country with other countries both Eastern and Western. That relationship, so far as this country is concerned, has always been one of friendliness. Our ancestors carried the message of our teachers far and wide and established cultural ties which have withstood the ravages of time and still subsist while Empires have crumbled and fallen to pieces. 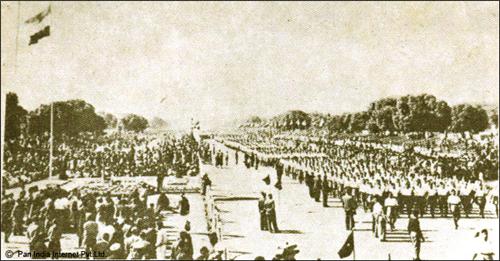 Our ties subsist because they were not of iron and steel or even of gold but of the silken cords of the human spirit, India has had to face, on many occasions, assaults and invasions by foreigners and she has very often succumbed. But, there is not a single instance of a military invasion or aggressive war by this country against any other. It is therefore in the fitness of things and a culmination of our own cultural traditions that we have been able to win our freedom without bloodshed and in a very peaceful manner.

The Father of our Nation, Mahatma Gandhi, was not a freak of nature but the physical embodiment and consummation of the progress of that spirit of non-violence which has been our great heritage. We have been able under his matchless leadership, not only to regain our lost freedom but also to establish and strengthen the bonds of friendship with those — and our thanks are due to them for it — against whose policy we have fought and won.

Our Constitution is a democratic instrument seeking to ensure to the individual citizens the freedoms which are so invaluable. India has never prescribed or prosecuted opinion and faith and our philosophy has room as much for a devotee of a personal god, as for an agnostic or an atheist. We shall, therefore, be only implementing in practice under our Constitution what we have inherited from our traditions, namely, freedom of opinion and expression. Under the new set-up, which we are inaugurating today, we hope to live up to the teachings of our Master and help in our own humble way in the establishment of peace in the world.

Our attitude towards all countries is one of utmost friendliness. We have no designs against any one, no ambition to dominate others. Our hope is that others also will have no designs against us. We have had bitter experience of aggression by other countries in the past and can only express the hope that it may not be necessary for us to take any measures even in self-defence.

I know the world today is passing through a most uncertain and anxious period. Two world wars within one generation, with all their devastation and aftermath of suffering and sorrow, have not been able to convince it that a war can never bring about the end of wars. It is, therefore, necessary to seek the end of wars in positive acts of goodness towards all and the world must learn to utilise all its resources for productive and beneficial purposes and not for destruction. We do venture to think that this country may have a past to play in establishing this goodwill and atmosphere of confidence and co-operation.

We have inherited no old enmities. Our republic enters the world stage, therefore, free from pride and prejudice, humbly believing and striving that in international as well as internal affairs our statesmen may be guided by the teachings of the Father of our Nation — tolerance, understanding non-violence and resistance to aggression.

It is in such a country and at such a time that it has pleased the representatives of our people to call me to this high office. You can easily understand my nervousness which arises not only form the tremendousness of the task with which our newly won freedom is confronted but also from a consciousness that I succeed in this sphere of activity, though not in office, one who has played such a conspicuous part not only during the period of strife and struggle but also during the period of constructive activity and active administration. You know Sri Chakravarty Rajagopalachari and have experience of his incisive intellect, great learning, practical wisdom and sweetness of manners. 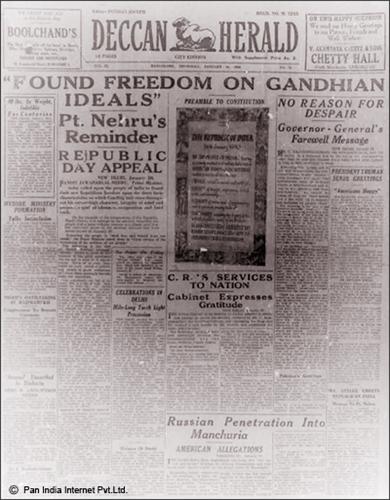 It has been my privilege to have been associated with him for more than 30 years and although we might have had occasional differences of opinion on some vital matters but never have our personal relations suffered by setback and I feel sure that I shall continue to enjoy the benefit of his protective advice in whatever crises I may have to face.

My nervousness and anxiety are to no small extent countered by a consciousness that I shall be the recipient of fullest confidence from our Prime Minister, Deputy Prime Minister, the Members of the Cabinet and the Legislature and from the people at large. I shall endeavour my best to earn and deserve that confidence. Let me also hope that this country will be able to win the confidence of other nations and secure such assistance as it may require in times of need. I have great pleasure in responding to the toast which has been proposed."