Quotes and Slogans for Republic Day

"One Nation, One Vision, One Identity. No Nation is perfect. It needs to be made perfect. Meri Pehchaan Mera India."
-Mahatma Gandhi

"Where the mind is without fear and the head is held high,
Where knowledge is free;
Where the world has not been broken up into fragments by domestic walls;
Where words come out from the depth of truth;
Where tireless striving stretches its arms towards perfection;
Where the clear stream of reason has not lost its way into the dreary desert sand of dead habit; Where the mind is led forward by thee into ever-widening thought and action
Into that heaven of freedom, my father, let my country awake."
-Rabindranath Tagore

"On the eve of 64th Republic day, let us salute and remember the soldiers who sacrificed their lives for the greater cause of the country."
-Anonymous

"We are Indians, firstly and lastly."
-B.R.Ambedkar 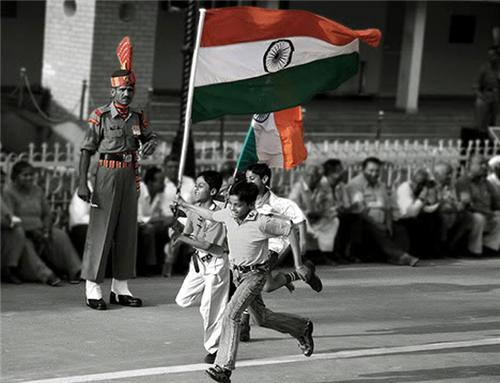 "Citizenship consists in the service of the country."
-Jawaharlal Nehru

"Let us together commence a journey of peace, harmony and progress in South Asia."
-Atal Bihari Vajpayee

"In triumph and in tragedy, One Nation, under God Indivisible
And pledge allegiance to the flag of our Motherland.
And to the Republic for which it stands
With liberty and justice for all, United we stand."
-Anonymous

"This Nation will remain the Land of the free, only so long as it the home of the brave."
-Anonymous

"In the truest sense freedom cannot be bestowed, it must be achieved."
-Anonymous

"Freedom in Mind,
Faith in Words,
Pride in our Heart,
Memories in our Soul,
Let us salute the Nation on Republic Day."
-Anonymous

"Let us pledge to respect the Constitution of Free India ."
-Republic day Slogan

"Let us remember the golden heritage of our country and feel proud to be a part of India."
- Republic day Slogan

"On this special day, let us promise our Motherland that we will do everything to enrich and preserve our heritage, our ethos and our treasure."
-Anonymous

"Freedom is not worth having if it does not include the freedom to make mistakes."
-Mahatma Gandhi

"The Roots of Violence: Wealth without work, Pleasure without conscience, Knowledge without character, Commerce without morality, Science without humanity, Worship without sacrifice, Politics without principles."
-Mahatma Gandhi

"Freedom is not given, it is taken."
-Netaji Subhash Chandra Bose

"At the dawn of history India started on her unending quest, and trackless centuries are filled with her striving and the grandeur of her success and her failures. Through good and ill fortune alike she has never lost sight of that quest or forgotten the ideals which gave her strength."
-Jawaharlal Nehru

"My definition of democracy is - A form and a method of Government whereby revolutionary changes in the social life are brought about without bloodshed. That is the real test. It is perhaps the severest test. But when you are judging the quality of the material you must put it to the severest test."
-B.R. Ambedkar

"Other might have forgotten, but never can I, the flag of my country, furls very high, Happy Republic Day!"
-Anonymous

"We the youth of India should take the pledge that till our last breath we will fight terrorism, we will protect our mother INDIA with all we have --- JAI HIND!"
-University of Mumbai, Republic Day Speech

"India is the cradle of the human race, the birthplace of human speech, the mother of history, the grandmother of legend, and the great grandmother of tradition. Our most valuable and most artistic materials in the history of man are treasured up in India only!"
-Albert Einstein

"Thousands laid down their lives, so that our country breathes this day…never forget their sacrifice!"
-Republic Day Slogan

"You must be the change you wish to see in the world."
-Mahatma Gandhi

"If not other than our common
ground to meet,
let me remember the anonymous,
for once at least,
beyond the patriotic floats display
on a Republic Day."
-Anonymous

"Democracy means nothing if people are not able to work the democracy for the common good."
-Chandra Bhushan

"Let new India arise out of peasants cottage, grasping the plough, out of huts, cobbler and sweeper."
-Swami Vivekananda

"India has no dearth of brave young men and women and if they get the opportunity and help then we can compete with other nations in space exploration and one of them will fulfill her dreams."
-Atal Bihari Vajpayee

"I feel that the constitution is workable, it is flexible and it is strong enough to hold the country together both in peacetime and in wartime. Indeed, if I may say so, if things go wrong under the new Constitution, the reason will not be that we had a bad Constitution. What we will have to say is that Man was vile."
-B.R. Ambedkar

"For a successful revolution it is not enough that there is discontent. What is required is a profound and thorough conviction of the justice, necessity and importance of political and social rights."
-B.R. Ambedkar

"Indians today are governed by two different ideologies. Their political ideal set in the preamble of the Constitution affirms a life of liberty, equality and fraternity. Their social ideal embodied in their religion denies them."
-B.R. Ambedkar

"Republic Day is a Day To remember,
When A Thought Of freedom Was Born,
Dont Just take It as A national holiday.
Try Something New To Improve Our Country."
-Anonymous

"Still Sleeping ? The nation need you ! You need to be Awaken ! You are part of world s biggest Democracy .. Today is the day when We got our own constitution."
-Anonymous

"She (India) has left indelible imprints on one fourth of the human race in the course of a long succession of centuries. She has the right to reclaim ... her place amongst the great nations summarizing and symbolizing the spirit of humanity. From Persia to the Chinese sea, from the icy regions of Siberia to Islands of Java and Borneo, India has propagated her beliefs, her tales, and her civilization!
-Romaine Rolland, French Scholar

"If there is one place on the face of earth where all the dreams of living men have found a home from the very earliest days when man began the dream of existence, it is India."
-Romaine Rolland, French Scholar

"If I were asked under what sky the human mind has most fully developed some of its choicest gifts, has most deeply pondered on the greatest problems of life, and has found solutions, I should point to India."
-Swami Vivekanada

"The truth comes as conqueror only because we have lost the art of receiving it as guest."
-Rabindranath Tagore

"When old words die out on the tongue, new melodies break forth from the heart; and where the old tracks are lost, new country is revealed with its wonders."
-Rabindranath Tagore

"We would rather starve than sell our national honor."
-Indira Gandhi

"Let us rejoice in happiness and indulge in celebration
Saluting the ones who made it possible
Singing in their admiration,
Who made India stand high and mighty.
Let us make them our Inspiration."
-Anonymous

"110 billion beating hearts
One thought
INDIA
On 26 January 1950, India received a letter,
“You keep working, I am coming”
Yours truly,
Success, Peace and Power."
-Anonymous

"One individual may die for an idea; but that idea will, after his death, incarnate itself in a thousand lives. That is how the wheel of evolution moves on and the ideas and dreams of one nation are bequeathed to the next."
-Netaji Subhash Chandra Bose

"Even if I died in the service of the nation, I would be proud of it. Every drop of my blood… will contribute to the growth of this nation and to make it strong and dynamic."
-Indira Gandhi

"When we are all united in action and addicted to deeds
Sky can’t be a limit for my Nation in action."
-A P J Abdul Kalam Azad