The Urs festival is held at Ajmer, Rajasthan every year at the tomb of the Sufi Saint Khwaja Moinuddin Chisti, commemorating his symbolic union with God. The Urs, commemorative celebration is held in the solemn memory of Khwaja Muin-nddin Chisti, a sprightly respected Sufi saint fondly revered as the benefactor of the poor, popularly known as Gareeb Nawaz. The Dargah Sharif in Ajmer is the place where the Saints mortal remains lie buried and is the site of the largest Muslim Fair in India.

Pilgrims from all over the world gather to pay homage. Qawalis (poems) are presented in the saint s honour and religious assemblies (mehfils) and fatihas (mass prayers) are held. The lakeside town of Ajmer also called Ajmer Sharif (holy) comes alive during the Urs which attracts thousands of devotees irrespective of caste, religion etc. The largest Muslim fair in India that springs up at this time displays religious objects, books, rosaries, embroidered carpets and silver ornaments and much more.

Mehfils & Qawwalis are held and mass prayer calls for the eternal peace of the mankind. An interesting ritual is the looting of Kheer (Milk Pudding), which is cooked in two large cauldrons, called Degs and distributed to the devotees as tabarruk (blessed food). The lakeside city of Ajmer is located in central Rajasthan, and is held in great reverence by devotees of all communities who call it Ajmer Sharif (Holy Ajmer). It is here that the mortal remains of the highly respected Sufi saint Khwaja Moin-ud-din Chishti lie buried.

The Khwaja came from Persia and established the Chishtia order of fakirs in India. He is popularly known as Gharib Nawaz (protector of the poor) because he dedicated his entire life to the service of mankind. His spartan life spanned almost a hundred years and he embraced death in solitude while he had withdrawn to his cell for six days, asking not to be disturbed.

The Dargah Sharif in Ajmer is the site of the largest Muslim fair in India. More than five lakh devotees belonging to different communities gather from all parts of the subcontinent to pay homage to the Khwaja on his Urs (death anniversary) during the first six days of Rajab (seventh month of the Islamic calendar.)

The pilgrims who come to seek the blessings of the Khwaja make rich offerings called nazrana at the holy spot where the saint has been entombed.

The offerings of rose and jasmine flowers, sandalwood paste, perfumes and incense contribute to the fragrance that floats in the air inside the shrine. 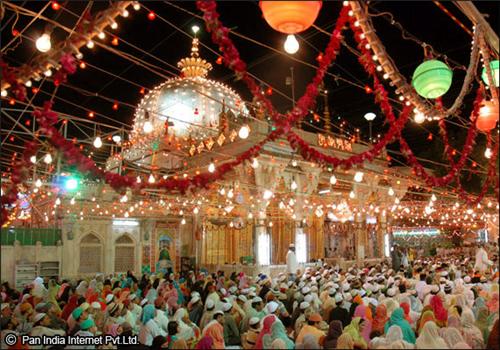 The shrine receives a number of Chadars, Ghilaph and Neema, which are votive offerings from several hundred thousand devotees.These are brought by devotees on their heads and handed over to the khadims inside the sanctum. Outside the sanctum sanctorum of the dargah, professional singers called qawwals in groups sing the praises of the saint in a characteristic high-pitched voice. People gather around them and listen attentively, sometimes clapping to the rhythm of their instruments.

The Urs is initiated with the hoisting of a white flag on the dargah by the Sajjada Nashin (successor representative) of Chishtis. It is done on the 25th of Jamadi-ul-Akhir (sixth lunar month), with the accompaniment of music. On the last day of the sixth month, the Jannati-Darwaza (gateway of heaven) is flung open early in the morning. People cross this gate seven times with the belief that they will be assured a place in heaven. On the 1st of Rajab, the tomb is washed with rose water and sandalwood paste and anointed with perfumes. This ritual is called ghusal. The Sajjada Nashin then covers the tomb with an embroidered silk cloth.

On the 6th day of Rajab, after the usual mehfil and the sound of cracker-bursts accompanied by music, the Sajjada Nashin performs the ghusal of the tomb. Fatiha and Salamti are read. A poetic recitation called mushaira is arranged in which poets of all communities arrive to recite compositions dedicated to the Khwaja. The Qul (end-all) on the 6th of Rajab marks the end of the Urs.

At night, religious assemblies called mehfils are held in the mehfil-khana, a large hall meant for this purpose. These are presided over by the Sajjada Nashin of the dargah.

Qawwalis are sung and the hall is packed to the capacity. There are separate places reserved for women who attend the mehfil. The mehfil terminates late in the night with a mass prayer for the eternal peace of the Khwaja in particular and mankind in general.

The Dargah is located at the conjunction of three bazaars. There are a number of restaurants around the Dargah where visitors can choose from a variety of dishes most of which are non-vegetarian preparations. Guesthouses on the road leading to the Dargah offer accommodation that ranges from economical to luxurious. Many other guesthouses are strewn across the city. The shops in the market around the Dargah sell flowers, prayer mats, rosaries, textiles, and general merchandise as well.

Ajmer is 132 kms. Southwest of Jaipur and 198 kms. East of Jodhpur. It is connected by road to Jaipur, Jodhpur, Bikaner, Udaipur and Kota. Ajmer is a railway junction on the Delhi-Ahmedabad section of the Western Railway. During the Urs, special buses ply from cities all over India carrying people to Ajmer and back.
Add comment
JComments
Download Hindi Festival Calendar 2022
Get free websitefor your Business