Vaikathashtami Festival is dedicated towards worshipping Lord Shiva in the form of Shivlinga. The festival is celebrated at the Vaikom Mahadeva Temple in Kerala which is one of the oldest and extremely popular temples of Kerala both from religious and social perspectives.

The festival of Vaikathashtami or Vaikkath Asthami is celebrated in the Malayalam month of Vrischikam (November – December). Lord Shiva, the main deity in the temple appears in three forms in a day - morning he is Dakshinamoorti, noon he is Kiratamurti and in the evening he is Sambhashivan along with Goddess Parvati. The temple of Vaikom Mahadeva is held in very high esteems among the Hindus. The Shivalinga established here is five feet in height, and is believed to have formed during the Treta Yuga.

Although the festival of Vaikathashtami is celebrated for a period of 12 days, but the Ashtami is the most important day. The sacred Ashtami day celebrations are held during the dark lunar fortnight of the Malayalam month Vrischikam (Sagittarius). 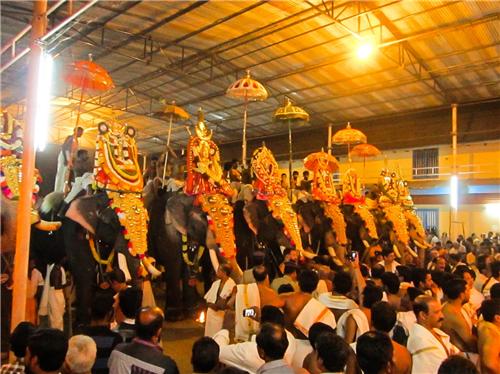 Colorful processions are carried out from one place to another, joined by different deities. The festival celebrations also include Dance performances and musical shows spreading throughout the night. Popular dance forms like Kathakalli are also performed here.

Nearest airport is the Cochin International Airport, about 56 km away.