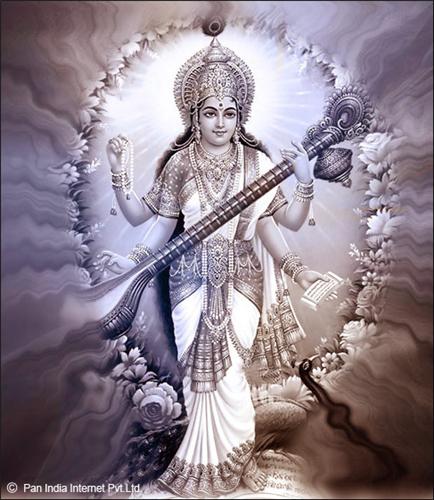 In the Vedas, Saraswati is a water deity and who is revered for purifying, fertilizing and enriching powers. The next stage in Saraswati s mythological history was her identification with the holy rituals performed on the banks of river Saraswati. She is said to have invented Sanskrit, known as the mother of all languages, scriptures and scholarships. It is also believed that she was one who discovered soma or amrita.

According to the Matsya Purana, Saraswati evolved from the mouth of Brahma. Such was her beauty and grace that Brahma pursued her. As she fled in different directions a head appeared and that is how Brahma is attributed with five heads. Saraswati was the most unique creation of Brahma and the moon and the lotus associated with the Goddess are both symbols of eternal womanhood.

In some places, Saraswati is believed to be a Surya Kanya, daughter of Sun. In western part of India, people relate Saraswati with lion or peacock as she was married to Kartikeya.

In eastern India, particularly Odisha and Bengal, Saraswati is highly worshipped and she has been given the mantle of Parvati’s daughter. Also, it is said that lord Vishnu had three wives - Saraswati, Ganga and Lakshmi.

Aryans and the Saraswati:

The Aryans fought with the non-Aryan Comi tribe (tribal dominance among the Aryans) like Nished, Sabar and Pulindar on the banks of the river Saraswati. On the request of Vishnu, Saraswati disappeared under the ground and reappeared again in far of Rajasthan. The tribal were thus deprived of the life - saving water and were forced to abandon the area.

Saraswati played a very important and vital role in the lives if Aryans as they lived along the banks of the river and all the early developments took place around her. Following to which, Saraswati was then known as the symbol of knowledge.

In both the cases we see the importance of the river Saraswati at the times of Aryan period.

The immortals and the Saraswati:

Some of the many mythological stories connected with Saraswati have interesting sociological interpretations. The gods and the demons by the mutual agreement decided to churn the ocean for Amrit or the elixir of life. Mainak Mountain was used as the churning rod and Basuki – a python, as the churning rope. When Lakshmi appeared with the Amrit kumbha both wanted the elixir. Saraswati with her exquisite beauty lured away the asuras or the demons. As the gods consumed the Amrit, Rahu and Ketu, two asuras saw them and slipped with the Gods. Lord Vishnu caught them while they drank Amrit, which would make them immoral like the gods. He immediately cut their heads off. After which, the two enraged asuras swallowed the sun and moon but could not retain them as their throats were cut. And according to the Hindu mythology, this became the reason for reason for solar and lunar eclipse.

There are several other legends associated with the Goddess, once the two sages, Vashishtha and Vishwamitra were both violently opposed to each other. Viswamitra ordered the river Saraswati to wash away Vashishtha along with everything that he possessed but Saraswati refused to comply with his command. To punish Saraswati, he turned the water of the river into blood and later on, at the behest of Shiva, the two sages became amicable and Vishwamitra then again turned the river pure.

The story of Kalidas revolves around the Goddess Saraswati. According to the legends, there used to be a proud princess who rejected all suitors who could not match her knowledge. The pundits in anger planned to marry her off to a fool. They saw a man cutting the branch on which he was sitting and decided he was the ideal fool for the princess. Then, Kalidas was presented to the princess as a man of wisdom who only spoke in signs. The pundits answered all the questions asked by the princess by interpreting Kalidas s signs.

Later on, the two were married but on the wedding night the princess realised she had been duped. She kicked Kalidas out of her home and he in sorrow and shame went to commit suicide. That is when the Goddess Saraswati appeared before him and asked him to take a dip in the river. As Kalidas emerged from the river, he was transformed. He began to recite verses in praise of the Goddess. Unfortunately for him, he began to praise her beauty not from her feet upwards but from her breasts downwards. Saraswati in anger cursed Kalidas for his audacity and cursed him that he would die in an ignominious place.