Vishwakarma is known as the divine Engineer since the Puranic age. As a mark of reverence he is not only worshiped by the engineering community but also by all other professionals. This festival is celebrated in the month of September. On this day all the workers in the workshops and offices worship their tools and instruments in front of Lord Vishwakarma, which are generally used in their profession.

This is the puja of Lord Vishwakarma, the main architect of the universe who had fabricated the universe as per the direction of Brahma, the lord of creation.

Vishwakarma Puja is celebrated by all industrial houses, artists, craftsman and weavers. The festival is observed on the Kanya Sankranti Day (September) which follows the Ganesh Puja.

In Hindu religious texts, he is known as Devashilpi or The Architect of Gods . His mother’s name was Yogasiddha and sister was known as Brihaspati. His father was called Prabhas, the eighth hermit of the legendary Astam Basu.

According to mythology, it is Lord Vishwakarma who not only made the universe but also the earth and heaven. It is said that Vishwakarma also created the weapons used in mythological times like the Vajra made from the bones of Dadhichi sage used by Lord Indra. Lord Vishwakarma is considered to be the best worker, the symbol of quality and excellence in craftsmanship. Mythology describes some of Vishwakarma’s creations in vivid details. They include the mythical town of Dwarka, the capital of Lord Krishna. It is also aid that Vishwakarma built the town of Hastinapur, the capital of Pandavas and Kauravas. Vishwakarma also built the town of Indraprastha for the Pandavas. Most important of all creations is Vishwakarma’s "Sone ki Lanka" where demon king Ravana lived and ruled. Lord Vishwakarma is the divine architect of the whole universe. He has four hands, carrying a water-pot, a book, a noose and craftsman s tools. 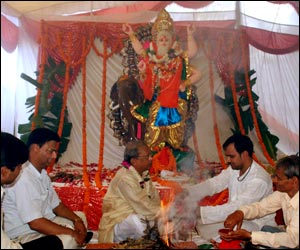 This festival of Vishwakarma Puja is celebrated with full enthusiasm. It is observed mostly in workshops, offices and factories in the industrial areas. Shop floors in various factories wear a festive look on this occasion. The images and idols of Lord Vishwakarma and his faithful elephant are inaugurated and worshipped in beautifully decorated pandals. The industrial towns in urban area come alive with decorative pandals and loudspeakers. Most factories around the area declare the annual bonus on this day. The puja pandals are usually made within the factory premises. On this day family members of the employees come together to create a bright moment in an otherwise dull and mundane workshop.

The rituals are followed by the distribution of "prasad". The yearly feast is cooked and the workmen and the owners take their lunch together. People are also seen flying multicolor kites. The sky fills up with all shades and colours. Chadials, Mombattis, Chowrangees, Petkattas, Mayurpankhis, Baggas fly high to establish the skills of the fliers. The sky becomes a war zone with the discarded kites dropping every now and then with the cry of "Bho-Kattaaa" from the distant roofs or parks.